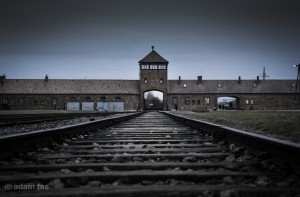 More than one million people are estimated to have been killed at the Auschwitz-Birkenau concentration camp, located in southern Poland, during the Second World War. Creative Commons photo.

A video shot by a local resident denying the Holocaust has been widely condemned by the community and at least one resident has filed a formal complaint with the Alberta Human Rights Commission.

On June 17, Monika Schaefer, a well-known Jasper resident and former Green Party candidate, appeared in a video on Youtube denying the Holocaust. The video was subsequently posted on her Facebook page.

“This is the most persistent and pernicious lie in all of history,” said Schaefer, about the Holocaust.

In the video she described the Holocaust as the “the six-million lie” in reference to the six million Jews who lost their lives at the hands of the Nazis during the Second World War.

The six-minute video quickly went viral and garnered more than 30,000 views at the time of publishing.

At the end of the video Schaefer invited viewers to read several books published by Holocaust deniers, including Ernst Zündel, who lived in Canada for four decades before being deported to his native Germany where he was imprisoned for five years for denying the Holocaust.

“Monika has a right to say whatever she wants to say, but once she’s published it I feel that’s moved on to hate speech,” said Kuzminski.

“She can stand up and say whatever she wants, but she has to accept the consequences of doing that.”

He said he has written a formal complaint to the Alberta Human Rights Commission, contacted the local RCMP detachment and the German embassy.

“By her denying that this ever happened it perpetuates hatred, racism and discrimination,” said Kuzminski, adding he’s heard from several young people in town that they no longer feel safe.

“This is not the community we are and what we believe in.”

The Alberta Human Rights Commission neither confirmed nor denied it had received a formal complaint.

“All of the information that comes into the human rights commission with regards to complaints is confidential,” said Susan Coombes, with the Alberta Human Rights Commission.

With that said, she said any complaint involving hate would fall under section three of the Alberta Human Rights Act.

“It’s really difficult to prove,” said Coombes, about whether someone is in violation of the act. “What you have to do is say that there was intent to incite hate.”

The Jasper RCMP confirmed it was aware of the video, but said no formal investigation has been launched.

“At this time what I can say is that I’m aware the video exists and it was brought to my attention,” said RCMP Sgt. Rick Bidaisee. “Discussions are ongoing.”

Schaefer said she stood by her comments in the video during a telephone interview July 11.

She confirmed she shot the video in Germany, where it is illegal to deny the Holocaust.

Schaefer was slated to perform during Canada Day, but was pulled from the schedule after the Canada Day committee learned a group of residents were going to protest her performance.

“We had really reliable information that there was going to be a protest and in the interests of public safety and her safety for that matter, we decided it would just be in everybody’s best interests if she stood down for this year,” said Pattie Pavlov, general manager for the Jasper Park Chamber of Commerce.

Kuzminski confirmed she is also banned from the legion.

The Centre for Israel and Jewish Affairs (CIJA) quickly condemned the video after learning of its existence.

“As a Holocaust denier, Ms. Schaefer, who appears in this absurd video, has earned her place on the very margins of society,” wrote Martin Sampson, director of communications for CIJA.

“Her comments would be laughable but for the intense pain they cause the survivor community and their descendants. Denying the Holocaust exposes her as an anti-Semitic ignoramus.”

“The truth is the Holocaust was industrialized, state-sponsored murder committed by the Nazis against the Jewish people. It is the most well documented genocide—by both perpetrator and victim—in history. To deny this fact is to spit in the face of truth.”

News that a formal complaint was lodged with the Alberta Human Rights Commission, comes after Prime Minister Justin Trudeau visited the Auschwitz-Birkenau concentration camp, on July 10 in Poland, where one million people, mostly Jews, were killed in the Second World War.