You Are Here: Home » Archive » Ukrainian dancers serve up entertainment for lunch 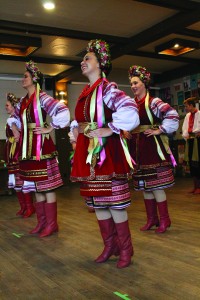 Manitoba’s SELO Ukrainian Dancers partnered with Habitat for the Arts to put on a lunch show July 7 at the Jasper Royal Canadian Legion. K. Byrne photo

Donning vibrant traditional garb, Manitoba’s SELO Ukrainian Dancers were a sight to be seen as they gracefully hopped, flipped and twirled across the Jasper Royal Canadian Legion stage, July 7.

The group of 10 dancing youths spent the beginning of July touring across Alberta and had dreamed of making their final stop in Jasper. After a few phone calls, the group was put in touch with Habitat for the Arts’ Marianne Garrah, who suggested expanding the performance into a bigger event.

Instead of a stereotypical dance show, the two organizations along with the legion’s cooking crew teamed up to host a two hour Ukrainian art and lunch event. While the dancers showed off their skills, onlookers were invited to dine on some traditional snacks like sausages, pierogies and cabbage rolls.

“We wanted to offer this cultural experience. That’s what we’re trying to do—get people to come here as they’re passing through,” said Garrah, adding that Habitat for the Arts is planning more events like the Ukrainian lunch.

During the out of ordinary dining experience, the dancers wowed the crowd with three traditional dances, swapping costumes for each performance. The first, the Hutzel, is derived from the mountainous regions of the country and had the moccasin clad dancers holding hands and swaying in circles as they kept up with the music’s upbeat tempo.
The second, the Policia, was a bit of a flirtatious affair as the boys and girls took turns chasing each other around the room. The finale, the Hopak, had the crowd clapping along as the dancers twirled around the room, throwing in a few impressive acrobatic flips and high jumps.

“When we do events like this it’s a little bit of an eye opener for people to this culture. Generally people are impressed by the costumes and the music and the quick dancing,” said SELO instructor Rod Picklyk, adding that Ukrainian culture is very prominent in Manitoba and Alberta.

He said that in the late 1880s many Ukrainians started immigrating to Western Canada, leaving the region speckled with Ukrainian descendants today.

“The Ukrainian culture is alive and well here, but if you don’t use it you lose it so it’s important to keep the young ones educated about their heritage,” Picklyk said. “Many of the dancers probably can’t speak Ukrainian but through their dance they have a connection to their culture.”

While only a handful of dancers made it to Jasper, the SELO dance school has about 100 students from ages five to 18. Over the years, the school’s dancers have performed in Europe and at several Ukrainian festivals across North America.

For Jasperite Mary Wilson the cultural lunch touched her on a personal level.

“My parents immigrated to Alberta from the Ukraine so it’s nice to see  some of my heritage without having to travel a great deal,” Wilson said. “You don’t get the opportunity to see this kind of entertainment every day.”