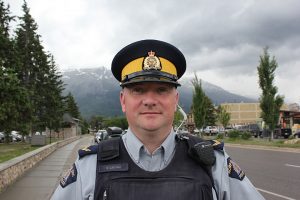 Combining his passion for community policing and his love of the outdoors, RCMP Cpl. Tibor Lichter couldn’t have landed in a better place.

The 37-year-old police officer arrived in Jasper with his wife late last year and brings more than 10 years of experience to the job.

Born and raised in southwestern Ontario, he studied at Dalhousie University in Nova Scotia before moving to Edmonton in his mid-20s.

Unfulfilled with his job in the big city he decided it was time to try something new and applied to join the RCMP at the age of 27.

“I had put in an application to the RCMP prior to moving to Edmonton and then I decided it was time to rekindle that and resubmitted it again and was selected and given a date to go to Depot,” Litcher said, referring to the RCMP’s national training academy in Regina.

Six months later he graduated and was posted in High Prairie, Alta., where he honed his skills as a front line officer for the next six years, including a short stint with the Lakeshore Police Service, a police force responsible for policing five First Nations that make up the Lesser Slave Lake Indian Regional Council Territory.

In 2013 he decided it was time for a change. He was sent to Cochrane where he worked with the integrated traffic unit patrolling area roads and highways.

Following his time there he moved to Jasper where he became a corporal.

Those responsibilities range from directing officers’ activities and monitoring their investigations to ensuring that there are prisoner blankets in the cellblock.

“Anything that is operational is my focus.”

When Litcher isn’t wearing his uniform you can often find him golfing, hiking and taking pictures throughout Jasper National Park.

“Even from High Prairie we would try to come to Jasper two or three times a year so to move to Jasper and live here was an exciting opportunity to take more advantage of what Jasper has to offer both as a town and as a national park.” 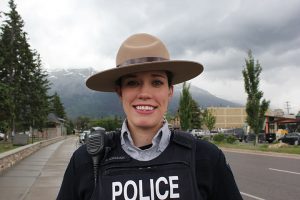 Fresh out of the RCMP’s police academy in Regina, RCMP Cst. Danielle Lohmann is already having an impact in the community.

Since her arrival in late February the 24-year-old officer has charged three people for impaired driving, a feat for even the most experienced officer.

“Targeting impaired drivers is definitely one thing that I feel very strongly about,” said Lohmann. “You would think in this day and age there wouldn’t be as many people doing it, but it’s still a prominent thing that’s happening so it’s definitely something as police officers we need to target in and around Jasper.”

Born and raised in Innisfail, Alta, she graduated high school in 2010 before completing a two-year criminal justice program at Lethbridge College.

After completing her degree she worked a few different jobs and travelled through Europe by herself for three months before deciding it was time to try her hand at policing.

“Right out of college I had applied to the RCMP, but I was only 19 and just decided I was probably a little bit too young so I withdrew my application, did a few things, went travelling, worked a few jobs and then decided to apply again and got in,” said Lohmann.

Unlike her supervisor Cpl. Tibor Lichter, moving to Jasper was the first time she had ever visited the community.

“I hadn’t actually ever been to Jasper before being posted here so it was super exciting,” said Lohmann. “I couldn’t complain about a first posting like Jasper.”

Reflecting on her first four months on the job she said she couldn’t be happier.

“It’s nice knowing that you are serving your community. I was from a small town so it’s nice to come back to small town.”

When she’s not policing she said she enjoys pretty much anything that is outdoors.

“I grew up riding horses and I snowmobile so it’s nice to only be an hour from Valemount.” 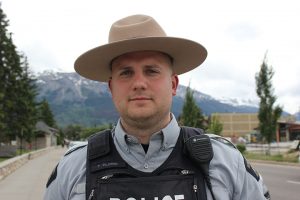 If you think Jasper is remote imagine living in Chateh, Alta., an Indian reserve nearly 850 kilotmetres north west of Edmonton.

“It’s the most northern posting in Alberta,” said Floris. “It was very tough to live up there because you are so isolated. Things like getting groceries was a full day event so it just makes you appreciate places like this more.”

Despite its remote location the 26-year-old said he learned a lot during his time up north.

“It definitely taught me a lot more about Canada and what the culture use to be,” said Floris, who arrived in Jasper at the end of March.

“To be 100 per cent honest I hadn’t ever thought I would be a police officer it was more so that I wasn’t enjoying my last job as much,” said Floris, who previously worked for CN Rail as a train car mechanic out of Surrey, B.C.

“It wasn’t so much the shift work it was just very monotonous. Day in day out it was the same thing and I just needed a little more excitement.”

When he isn’t working he enjoys playing video games and watching movies and spending time with his new dog, a nine-week-old cane corso.

“I’ve only been here for three months so I’m still trying to adjust,” said Floris, “I’m looking forward to meeting as many people as possible, it seems like a great community and everybody is really tight here so I’d like to join in and play my part.”