You Are Here: Home » Archive » The end of an era: Jasper’s backcountry in a state of decay

The end of an era: Jasper’s backcountry in a state of decay 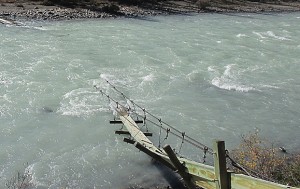 A suspension bridge spanning the Athabasca River was built by Parks Canada in 1985. It was washed away during a flood in 2014 and never replaced.  R. Hanske photo.

Jasper National Park was once considered the mecca of backcountry travel in Canada’s mountain national parks, but two decades of neglect by Parks Canada and a fundamental shift in the agency’s priorities has left the park’s backcountry trail system a former shadow of itself.

Throughout the 1970s and 1980s, backcountry enthusiasts flocked to Jasper to explore the park’s 11,000 square kilometres. It was a place built for backcountry travel and Parks Canada provided the infrastructure needed to do it.

But by the early 1990s, budget cuts and a push to protect the park’s ecological integrity marked the beginning of the end for many of Jasper’s backcountry trails.

Few people know this better than Jim Suttill, who spent more than three decades cataloging and building the bridges and trails needed to access the park’s most remote areas.

“I don’t think you can deny it’s disappointing, but things change,” said Suttill, about the state of Jasper’s backcountry.

During the hay-days of the 1980s and early 1990s, the former trail crew boss estimates the trail crew built more than 900 bridges over a 15-year period thanks to a healthy budget and a desire by Parks Canada to make the backcountry more accessible.

“I had a really handy bunch of guys. They were an eclectic bunch, but we got a lot done.”

While the majority of the bridges the trail crew built were small foot bridges over creeks, the trail crew made its name by taking on more ambitious projects, like the former suspension bridge across the Athabasca River that connected hikers to Fortress Lake, in B.C. The bridge was washed away during a flood in 2014 and was never replaced. 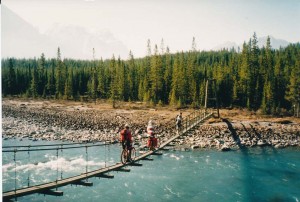 According to Suttill, a big difference between his time as a trail crew boss and today’s trail crew was that he spent a lot of time in the backcountry overseeing projects.

In fact, over the course of his career he travelled the South Boundary Trail nine times and the North Boundary Trail at least 12 times, documenting and cataloging infrastructure as he went.

In addition to regularly visiting the backcountry, it also helped that the trail crews worked 10 days straight allowing them to spend a significant period of time in the backcountry to complete larger projects.  According to Suttill, in those days the trail crew carried out more than a dozen 10-day trips each year.

Today the trail crew spends significantly less time in the backcountry, but on occasion will spend up to eight days in the backcountry for larger projects. Most trips are anywhere from one to five nights in length.

According to Suttill, the first sign Parks Canada’s priorities were beginning to change took place in 1994.

“In 1993 I did my year end report and I said things were going so well they’re bound to get cut and it was a terrible thing to say because in 1994 they got cut,” recalled Suttill.

“It was like death by a thousand cuts, because they would just keep cutting.”

By the time Suttill retired in 2012, his budget was a fraction of what it used to be and he had only two crews of four people each, a far cry from the 20 people who worked for him in the 1980s.

“I remember the last couple of years I would go out and it got depressing because I would be looking at things that needed work and I couldn’t do anything about it,” said Suttill.

Brian Patton, co-author of Canadian Rockies Trail Guide–considered the bible of the Canadian Rockies–also expressed his disappointment about the state of Jasper’s backcountry.

“The 1970s was the backpacking era,” said Patton, who published the first edition of his book in 1971.

“All of a sudden Parks Canada took an interest in the far backcountry because Jasper didn’t have the same sort of day hiking opportunities that Banff and Yoho had so it became the backpackers’ park,” said Patton, who personally explored most of Jasper’s backcountry terrain.

“When we did the North Boundary Trail it was a wilderness experience, but you weren’t having to deal with fording rivers and things like that,” recalled Patton.

Today things are quite different with washed out bridges and crumbling infrastructure throughout the park’s backcountry.

“There’s nothing wrong with going into remote wilderness and having to get across rivers and stuff, but it’s nice for people to have a wilderness experience where they can just think about putting one foot in front of another day-after-day and not have to worry they might drown,” said Patton.

Nowhere are the changes more evident than on his website, where there is an up-to-date list of decommissioned trails in Jasper National Park, including Maligne Pass, Blue Creek, Moose Pass and Miette River, among other trails.

Patton blames the deterioration of the backcountry on economics.

“I think it just comes down to numbers,” said Patton.

“They want to do the things that are popular with the mass of tourists,” he said, pointing to the proposal to build a paved trail from Jasper to the Columbia Icefields.

Despite lack of investment in Jasper’s backcountry over the past two decades, things are a lot better today then they were just a few years ago when government cuts nearly eliminated the trail crew all together.

Today the trail crew includes 18 people and has been slowly chipping away at the backlog of neglected projects.

“This summer, the Jasper trail crew has been focusing their efforts on trail upkeep and maintenance, including the replacement of trail crossing structures, bear poles and general trail management,” wrote Steve Young, a communications officer for Jasper National Park.

“Additional trail work has included paving the Lake Annette Loop to make it more accessible and we’ve also made upgrades to Trail 7, along the Athabasca River.”

According to Young, upgrades are also underway to improve the Valley of the Five Lakes. The Tonquin, Skyline and Brazeau Loop trails are also being assessed for improvements.

In 2015 Parks Canada added Hidden Cove to its family of backcountry campgrounds and upgrades were also made to Saturday Night Lake Campground as well as Athabasca Island. The picnic area was also improved at Big Bend and other comforts were enhanced at Evelyn Creek, Lower Fryatt and Celestine.

With fewer dollars to maintain Jasper’s trail network a lot of work has fallen on the shoulders of volunteer groups, such as the Jasper Trail Alliance, which works under the auspices of the Friends of Jasper National Park.

According to Loni Klettl, a leader with the Jasper Trail Alliance, it is the only accredited volunteer group that she is aware of that is allowed to clear trails in any of the mountain national parks.

“A lot of parks don’t make it easy to work with people,” said Klettl, who counts herself lucky to have the partnership she has with the Friends of Jasper National Park and Parks Canada.

While she is a strong supporter of Jasper’s trail crew, she said in this day and age Parks Canada needs to recognize that volunteer groups can also be part of the solution.

“Parks Canada has to be willing to change,” said Klettl, pointing to the Rocky Mountain Wilderness Society, a volunteer group that helps maintain trails in Willmore Wilderness Park, north of Jasper.

For now the volunteer group has been allowed to improve trails closer to town, but she said she hopes Parks Canada will soon let the group work on trials further afield.

According to Patton, Parks Canada is one of the few management organizations in North America that have yet to utilize local volunteer groups to maintain trails and facilities.

He blamed part of the problem on the tenuous relationship between the union and Parks Canada’s management.

“I’ve always felt there was a certain amount of head butting and transience between management and the union,” said Patton.

“I’ve always supported hiring people to work on the trials, but when it became obvious the money was going to be shut off I started to think maybe it’s time Parks Canada uses volunteer groups.”

But not everyone agrees.

“Management seems to love volunteers, they seem to think they are getting something for nothing, but there’s a price,” said Suttill.

“Four guys that are paid and know what they’re doing can out work 20 volunteers, easily, and you know what you are getting.”

While people may disagree on the solution to improve Jasper’s trails, one thing everyone agreed on was time was running out.

“There’s no time to waste,” said Klettl. “The trails are disappearing at an astronomical rate because of climate change and growth.”