You Are Here: Home » Archive » Searching for a dial tone on the Icefields Parkway

Searching for a dial tone on the Icefields Parkway 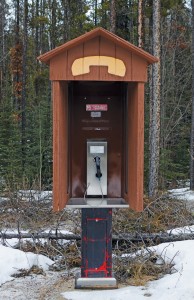 Can you hear me now?

If you’re on the Icefields Parkway, the answer echoing off the chain of snow-capped mountains that skirt the road’s edge is an unequivocal, bellowing no. The 230-km scenic highway that stretches from Jasper to Lake Louise is a dead zone for cell reception, making it one of the few remaining places in the country where payphones continue to serve a purpose. But, unfortunately, even on the isolated mountain road, where accidents aren’t uncommon, payphones—much like Jasper National Park’s Woodland caribou—are on the road to extinction, with only about a dozen remaining.

Those that exist are the property of Telus. In an email, the telecommunications company said when it removes phones it is careful to first ensure there are alternate options within a reasonable distance.

It did not, however,  respond to repeated requests for an up-to-date list of payphone locations, nor did it provide a list of those that have been decommissioned in the last few years.

So, to find out for myself, I decided to drive down the highway March 17, stopping at nearly every pullout and hostel along the way, in search of the elusive coin-operated, hard-wired communications devices of our past, only to find eight—six of which actually worked.

Upon further research, I discovered there are likely a few more, however they either weren’t accessible from the road—at least without trudging through knee-deep snow—or they weren’t immediately visible to my searching eye.

The Icefields Parkway is a spectacular scenic route that is marketed around the world as a must-see tourist destination.

In the summer months, the road is overrun with RVs, buses and cars, as visitors take in the breathtaking views—from sweeping valleys to emerald green lakes, towering glaciers, gushing waterfalls and snow-capped mountains. Summer is the busiest time of year on the parkway; it’s also the busiest time of the year for Jasper’s first responders and tow truck drivers, as increased traffic volumes result in more accidents.

“For us, when it comes to an emergency, it’s all about response time and being so far out there, the response time is long already. When you compound  the fact that at this time of year—in the winter—if someone has to backtrack until they find a payphone … it adds a significant amount of time on.”

That extra time can be the difference between life and death.

“Certainly any delay in getting emergency assistance could have drastic consequences,” said RCMP Const. Ryan Gardiner.

The RCMP is often the first on the scene after an accident. Gardiner said, depending on road conditions and traffic volume, it can take up to an hour to arrive at the scene, and that’s on top of the time it takes someone to get to a payphone to call 911.

“If there’s no communication or no way for people to contact emergency help those delays could have fatal consequences.” 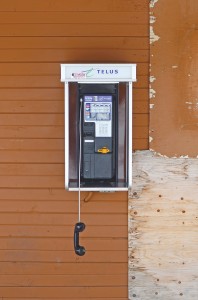 Ray Indic, owner of Jasper Towing, said there was a time when communication on the highway wasn’t the issue it is today, but with the decommissioning of warden stations and payphones, these days it’s difficult to call for help.

“It’s gotten worse out there rather than better,” he said. “It’s worse because the wardens aren’t patrolling the highway like they were before.

“It used to be there would always be a warden on the road at some point in the day and they would use their communication—their radios—and that worked really well.”

Indic said, these days, often calls come in from Good Samaritans who happen upon a car in the ditch and agree to stop at the next payphone to call for help.

“Often we get reports from a third party and they don’t give us a lot to go on.

“The lack of communication for us—how should I put this—we hesitate to do the call because we don’t know for sure the individual is going to be there and we don’t get a proper description.”

He said sometimes it’s hard to justify making an hour trip down the highway—and an hour trip back—if you’re not sure someone will be there waiting for you when you get there.
Indic said if it were up to him there would be cell service along the highway, at least intermittently, to ensure people are able to call for help when they need it, without having to search for long stretches of highway for the closest payphone.

“We need to put more pressure on the cell phone companies to get cell coverage through there,” he said. “In this day and age there is no reason we shouldn’t have cell service down there.”

During the Jasper Park Forum March 16, Supt. Alan Fehr was asked whether cell towers are being considered for the highway.

The answer was no.

“We’ve had this question posed to us on a number of occasions,” he said, noting that it would be up to a phone provider to come forward and make a proposal. “When we have the opportunity we raise [the issue] and we’ll continue to do so, but right now we don’t have anything. There’s nothing definite.”

So that leaves payphones.

From Jasper, the first payphone is located at Becker’s Roaring River Chalets, just a few kilometres out of town where there is still cell reception. The next is at the Valley of the Five Lakes trailhead, where a booth with stickers advertising local cab companies is entrenched next to an outhouse and trail sign. Cell reception can be hit or miss in the area, but one thing’s for sure, on March 17, the Valley of the Five Lakes payphone offered nothing but dead air. 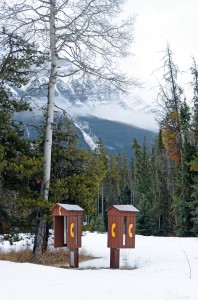 The next two payphones are located in the Athabasca Falls parking lot. In the winter months, the area isn’t maintained, but last week the snow was hard-packed, allowing easy access from the parking lot’s entrance. One of the two phones had a coin slot, but it refused to accept change of any denomination, spitting it out as fast as I could put it in, and like the rest of the payphones I found, it no longer accepts phonecards. That leaves collect calls and credit card payments. Good thing 911 calls are free.

There’s also a phone less than 1.5 km down the highway at the entrance of the Athabasca Falls Hostel, as well as another in the hostel’s cook shelter.

Last week’s hunt for payphones wasn’t just an excuse to take a joyride down the parkway. It began a few weeks ago when I rode my bike past a friend’s Geikie Street home. Out front sat a demolished truck, with its front airbags deployed and plastic sheets covering its shattered windows. It was a startling sight.

Moments later, while I was still processing the scene, I ran into that same friend downtown and she filled me in on the details: her partner was driving to Calgary when he hit a piece of black ice and rolled his truck into the ditch.

To be honest, it’s not an uncommon story; every year motorists fall victim to the parkway’s variable road conditions. But what struck me was what came next: the closest payphone didn’t work.

“There was no dial tone,” recalled Nic Bazin a couple weeks after his accident. “The phone didn’t work.”

As coach of the Jasper Freeride Ski Team, Bazin drives anywhere from 35,000 to 40,000 km a year to  and from training camps and competitions—most of which are in Lake Louise, Banff and Calgary, at the other end of the parkway.

On March 3, he hit a patch of black ice 35 km outside of Lake Louise, ultimately totalling his vehicle, which ended up upside-down in the ditch.

It was 9 o’clock in the morning and his friend and president of the Freeride Ski Team, Cam Jenkins, happened to be following close behind. Jenkins stopped and checked on Bazin, then went to find a payphone. The closest was at Bow Lake. It didn’t work.

During my search, I didn’t find the Bow Lake payphone—although not for lack of trying.

I did, however, find a number of signs for phones that were nowhere to be found, as well as a sign at Honeymoon Lake where a gate spanned the snow-covered road. 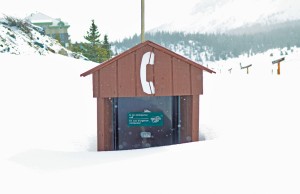 Payphone booth at the Icefields Centre with no phone inside. | N. Veerman photo

Further down the road, there were working phones at the Sunwapta Falls Warden Station, Beauty Creek Hostel and Saskatchewan River Crossing Warden Station. There was also a phone at the Saskatchewan River Crossing restaurant, but it didn’t work, and there was also an empty phonebooth, buried in snow, in the lower parking lot of the Icefields Centre.

According to Telus, that phone is removed each winter.

“The phone at the Icefield Visitor Centre only operates when the facility is open, generally during the late spring and summer months,” wrote Telus’ Emily Hamer in an email.

Parks Canada did not provide an interview for this story, instead sending an emailed statement, reminding visitors to be cautious while driving through remote areas of the park.

“Parks Canada is not responsible for the payphones situated at various locations adjacent to the Icefields Parkway,” wrote Steve Young, communications officer for JNP. “Further questions should be directed to Telus.”