You Are Here: Home » Archive » Sarah Smith returns to Jasper backed by a full band

Sarah Smith returns to Jasper backed by a full band 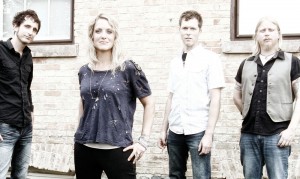 Known for her raspy voice and pop rock tunes, Sarah Smith is no stranger to living on the road.

“We’re constantly touring,” said Smith, who is set to play in Jasper on July 17 at the Royal Canadian Legion.

“We get to hang out with people, play music and make friends. It really is like a dream.”

As the former lead singer of the highly successful Canadian band The Joys, Smith launched her solo career in 2012 after the band decided to go its separate ways.

“The road can really drain a person if it’s not for you and I think at that point we all had to get off the road,” said Smith, who played more than 200 shows a year and completed seven cross-Canada tours with her former band.

“It was pretty crazy, but I’m crazy, so I just wanted to keep going.”

Determined to keep her dream alive, she hasn’t let up, producing two albums in three years.

“I play six shows a week, sometimes seven, and I’m playing the same tunes every night, over and over, but to be honest with you I enjoy every one of them,” she said.

Her most recent album The Journey, was produced in Germany in 2014 and includes the crowd favourite “I Need to Know.”

“It’s about being an extrovert, which I am, and I’m always attracted to introverts, the people who like to deal with things inside themselves,” she said.

“It can be painful to be an extrovert dealing with an introvert.”

Raised on a farm in Arthur, Ont., she credits her rural upbringing with shaping her into the person she is today.

“It definitely influenced me because you’re pretty isolated when you grow up on a farm,” said Smith.

This will be her third time playing in Jasper, but first time touring western Canada with a full band.

“Jasper is an awesome town and it’s always somewhere we want to stop whenever we’re out west.”

She is also scheduled to open for Joel Plaskett at the Wild Mountain Music Festival in Hinton on July 19.