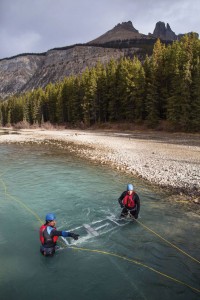 A Quebec-based company will begin installing river turbines across five mountain national parks next year to power some of the parks’ off-grid campgrounds.

Up to 10 turbines will be installed along major rivers in Jasper, Banff, Yoho, Kootenay and Glacier national parks in the spring, according to Idénergie, the company installing the turbines.

Three of those turbines could end up in Jasper, although where they will be installed and which campgrounds will receive power hasn’t yet been determined.

“We assessed Snaring, Kerkeslin, Jonas, and areas around Sunwapta, Maligne Lake and Whirlpool Campground, but I haven’t got anything back from the company in terms of which areas were most suitable yet,” said Steve Blake, special projects coordinator for Parks Canada.

“We are encouraged by what we’ve seen and an initial environmental assessment at a couple locations indicated that it’s a reasonable product for us to test.”

The turbines are part of campground upgrades taking place over the next five years and could provide power for lights and washroom facilities.

The spinning hydrokinetic turbines use the river’s current to produce electricity, which is then stored in batteries and converted into 120 volts. One turbine can generate up to 12 kWh a day and will eliminate the need for gas or diesel generators at campgrounds.

According to a study by an American company, the turbines pose a minimal risk to fish.

“The studies show that 98 per cent of the fish will avoid the turbine,” said Emmanuelle Kenol, a marketing and communications coordinator for Idénergie.

She said of the two per cent of fish that do end up entering the turbine, more than 90 per cent have no injuries at all.

Jill Seaton, chair of the Jasper Environmental Association, said she had no issues with the turbines themselves, but was concerned how lights outside of the townsite might affect Jasper’s dark sky status.

“You are going to have campgrounds all the way down the Parkway that are lit up at night—I don’t think that’s a good thing,” she said.

She also raised concern about the possible placement of turbines along the Maligne River and how that might affect Harlequin ducks, which are considered a sensitive species by the provincial government.

The turbines will be anchored to rocks on the bottom of the river and submerged under at least two feet of water, with a cable connected to the batteries on shore. There will also be a yellow warning sign installed 100 metres upstream from the turbine to warn users of its presence.

“As with any river hazard it would be as easy to avoid as a rock or a log in the river,” said Blake, explaining Parks doesn’t intend to install turbines where commercial activities take place.

“We work well with Parks and anytime they’re doing a project that’s going to potentially impact a commercial outfitter they always consult with us and include us in the decision making process and, having said that, it sounds like it’s not going to be affecting our section of the river,” said Eadie.

“Alternative energy is a great thing and it’s good to see Parks moving in that direction. If Parks was going to put it somewhere where it would affect us, they’re generally pretty good with contacting us and giving us a heads up,” said Howe.

The installation of turbines in the Rocky Mountain National Parks is part of the Build in Canada Innovation Program, a federal program designed to help small- and medium-sized businesses test innovative products before taking them to market.

“We are very excited about this project because the rivers in the Rockies are the perfect fit for our technology,” said Kenol.

“All the turbines that will be installed for campgrounds will be uninstalled at the end of the season, however, Parks Canada is going to keep them so they can reinstall them every season after that,” she said.