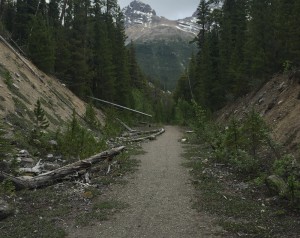 A proposed trail from Jasper to the Columbia Icefields will cost an extra $20.5 million. The proposed trail will use parts of the old paved highway such as this. D. Regett photo.

A controversial project to build a paved bike trail from Jasper to the Columbia Icefield will cost significantly more than first thought.

According to Parks Canada, the proposed trail will cost an extra $20.5 million, which it will pay through its infrastructure investment program.

The estimated price tag to build the 107-km trail is now $86.4 million. Parks Canada said the total cost is based on the outcome of consultations and a detailed impact analysis.

In March, the Liberal government earmarked $65.9 million in the federal budget for the consultation, design, and construction of the trail.

“When we first were looking at it we were trying to come up with what we thought would be a rough estimate of the total price,” said Alan Fehr, superintendent for Jasper National Park.

“In budget 2016 they put $65.9 million towards this proposal and it was determined that if there was more money required that Parks Canada would take care of that out of the infrastructure investment fund that we have,” he said, explaining the money is coming from Parks’ national capital budget.

In June, five environmental groups voiced their opposition to the project citing a lack of public input. The groups also said they feared a paved trail would damage critical habitat for endangered species.

In a press release published on Jan. 6, Canadian Parks and Wilderness Society (CPAWS) called on Catherine McKenna, the minister of environment and climate change, to reject the project.

“This proposal is inconsistent with the federal government’s stated commitment to limit development in our national parks, and their legal obligation to put ecological integrity first in all aspects of park management.”

“It is also contrary to Parks Canada’s obligations to protect species at risk in the park, as the proposed trail would fragment and destroy critical habitat for threatened woodland caribou and sensitive grizzly bears, and disturb and potentially displace wildlife through its use.”

Jill Seaton, chair of the Jasper Environmental Association, echoed those concerns, but said her organization would prefer to see Parks Canada widen the shoulders of the highway rather than create a new trail.

She said she’s also concerned about where they are going to get the gravel to build the trail.

“If they’re collecting it in the park then there goes their ecological integrity right there.”

According to Parks Canada, the project is based on the Icefields Parkway Strategic Concept, which briefly states the need to “develop” and “explore” options to enhance cyclists’ needs. Parks Canada also said the project is part of the management plans for both Jasper and Banff National Parks.

While Jasper’s management plan doesn’t specifically mention a paved trail from Jasper to the Columbia Icefield, the Banff management plan mentions it four times, although Seaton questioned Parks Canada’s interpretation of the plan.

The Banff management plan states: “Complete a long-distance cycle route from Canmore to Jasper that enables users to avoid travelling on the Trans-Canada Highway, by developing a cycle route connecting the Bow Valley Parkway and the Icefields Parkway.”

Seaton pointed out the statement doesn’t specifically state there should be a paved bike trail through Jasper National Park, rather the plan envisions building a bike path connecting the Bow Valley Parkway to the Icefields Parkway so cyclists can avoid travelling on the Trans-Canada Highway.

According to Parks Canada, the multi-use trail will run parallel to the Icefields Parkway and make use of areas that have already been disturbed, such as the old paved highway, and could be extended to Lake Louise. Public consultations will begin early this year with a targeted completion date of March 2019.

“We’re in the conceptual phase of this project, it’s a proposal,” said Fehr.

“The next phase of this project is consulting the public, consulting Indigenous peoples and hearing what they have to say and then us doing some of our own leg work to ensure there aren’t any significant environmental impacts.”

He said public consultations will begin within the next few weeks. There will also be an online component and Fehr said Parks intends to publicly share a draft of its detailed impact assessment with the public.

“We want people to see what the potential issues are and how they might be mitigated and then based on that information the minister will make a decision whether we’re going to proceed or not,” said Fehr.

Despite his reassurance, Seaton cast doubt about whether public consultations will actually amount to anything.

“They always have public consultations, but do they listen to them?” asked Seaton.

“People are voicing their opinions already about the tremendous expense it’s going to be and quite frankly their press release sounds as though it was written by the tourism industry.”

CPAWS called on the government to use the money to restore science capacity and conservation programs and urged Canadians to voice their concerns about the proposal.

The Association for Mountain Parks Protection & Enjoyment (AMPEE), a vocal supporter of the project, said it supported the government’s detailed impact assessment process.

“AMPPE believes in the federally mandated impact assessment process that ensures the responsible usage of our mountain parks and the protection of the wildlife within,” wrote Casey Peirce, executive director of the pro-tourism group.

Fehr acknowledged that some people are concerned, but pointed out that the area is already zoned for this type of activity.

According to Fehr, the outdoor recreation zone extends 100 metres from the centre line on both sides of the highway, however the proposed trail will likely only be about 20 to 30 metres off of the highway.

“It’s not going to be on the outer edge of the 100 metres, it’s going to be closer so that as people wind their way through they’ll get a sense that they’re in a natural setting, but they’re safe,” said Fehr.

During the telephone interview he played down concerns about paving the trail, explaining that it will reduce maintenance costs and provide a more enjoyable experience for people with strollers and wheelchairs.

“It’s not being designed for hardcore cyclists to go from Jasper to Wilcox Campground in the morning and then back again. This is intended for recreational use, for people to connect with nature.”