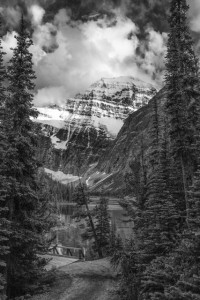 Mount Edith Cavell will be on display in all her glory during a black and white photo exhibit held at the Jasper-Yellowhead Museum and Archives over the next two months.

The exhibit features eight photographs by Ron Brown, a professional photographer who lived in Jasper for more than 30 years. He now lives in Courtenay, B.C, on the east coast of Vancouver Island.

“Angel Glacier like all glaciers are disappearing,” said Brown, in reference to one of the glaciers on Mount Edith Cavell.

“It changes all the time and that’s what made it so interesting to go up there,” he said, adding he would visit the mountain two or three times a week when he lived in town.

The exhibit is organized in conjunction with the 100th anniversary of the death of Edith Cavell, a British nurse who was murdered by a German firing squad during the First World War.

Cavell was arrested on Aug. 5, 1915, after being betrayed by a German spy who asked her to help him escape Belgium and find refuge in neutral Holland.

Prior to her arrest, the 49-year-old Red Cross nurse was credited with saving hundreds of soldiers lives, without regard for their nationality, by disguising them as patients at her training school and providing them with money and guides to escape to Holland.

Mount Edith Cavell was named after her following her death.

The photography exhibit, which opens Sept. 12, will be on display at the museum until Nov. 14. There will be a wine and cheese reception Oct. 10, organized by Habitat for Arts, where Brown said he will be in attendance.

“Ron lived here for 30-plus years and he has taken photographs progressively throughout the years, so the images he’s presenting will show you the Cavell we all know, the Cavell some of us used to know and the Cavell that our seniors and elders knew a while ago,” said Marianne Garrah of Habitat for the Arts.

When Brown first started photographing Mount Edith Cavell he said he didn’t realize the significance of what he was witnessing.

“It wasn’t until probably the late 90s that I started going ‘hey, this is interesting, there is more here than I thought’ and that’s why I became more attuned to the fact the ice is changing, shifting, melting,” he said.

“There’s a lot of different ways to look at a subject like that because it’s so dynamic,” he said, explaining he sees his photographs of the mountain through the lens of an artist as well as a historian.

He estimates he has taken at least 300 photographs of the mountain over the years, the majority of which were taken using a 4×5 film camera. He made the transition to digital cameras in the late 2000s, but still uses his film camera now and again.

He said the oldest photograph that will be on display is from 1984.

“I think it’s important to go look at [Angel Glacier] because it’s not going to be there much longer,” he said.