You Are Here: Home » Archive » Parks developing action plan for species at risk in Jasper park 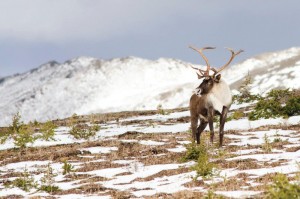 Woodland caribou are listed as threatened under the Species at Risk Public Registry. | Parks Canada photo

There is, of course, the much talked about Woodland caribou. But there is also the olive-sided flycatcher, the common nighthawk, Haller’s apple moss, whitebark pine and two species of bats—the little brown myotis and the northern myotis.

Currently, three of those four species are considered endangered: whitebark pine, as well as the two bat species, while the remaining four are listed as threatened.

To ensure the longevity of these species and to fulfill its obligations under the Species at Risk Act, Parks Canada is currently working on a multi-species action plan that will steer the agency’s future recovery efforts.

Rasheed presented some of Parks’ proposed recovery actions at the annual Jasper Park Forum, March 16, and explained to the packed house that as part of the process of creating an action plan,

Parks is required to consult with the public—and that consultation period is now open.

“Part of the action planning process is trying to cooperate and consult with both stakeholders and the public, our indigenous partners and any other interested parties, whether it’s provincial jurisdictions or other federal jurisdictions. That public consultation process is ongoing right now,” he said, noting that sometime this spring a draft action plan will be released to the public on the Species at Risk Public Registry for further review.

“As part of that formal consultation, we are compelled by the act—the act is incredibly prescriptive—to post the action plan on the species at risk registry, an Internet site where all national parks, all jurisdictions, have to post these action plans and recovery strategies,” he said.

Once the draft is posted, there will be a 60-day public consultation period before the plan is amended and finalized.

“The intent of this consultation is to make sure we get it right,” said Rasheed.

In JNP, Woodland caribou garner the most attention out of all of the park’s species at risk.

There are currently 31 caribou remaining in the Tonquin herd, 10 in the Brazeau and three in the Maligne.

According to Parks’ annual report for 2015, the Tonquin herd is considered large enough to be self-sustaining, but ongoing conservation efforts are necessary to support the herd’s recovery.

The other two herds, however, are considered critically small and could benefit from herd augmentation—which is one of the proposed recovery actions in the draft action plan.

To help with that augmentation, Parks had planned to work with the Calgary Zoo and the Government of British Columbia on a captive breeding program, but the zoo pulled its support in 2014, citing funding as the primary reason for its decision.

Since then, little has been said about the breeding program.

“We’re still looking at what our options are and how we’re going to proceed with it,” said Shelley Bird of the Mountain National Parks Caribou Conservation Program. “We don’t have any timelines. We don’t have any more information.”

As well as investigating options for augmentation, another proposed recovery action is to manage seasonal access to critical caribou habitat. That is an action that is already being undertaken in JNP, with delayed winter access in numerous areas of the park, preventing skiers from creating packed trails that make it easier for wolves to access caribou in the alpine.

“As far as the action plan goes, our caribou actions are basically what we’ve already been working towards,” said Bird. “We’ve identified what the threats are and we’re working towards addressing those.”

During the forum, Rasheed stressed that recovering an endangered or threatened species doesn’t happen overnight; it can take decades.

As an example, he pointed to the recovery actions in place for whitebark pine—one of the park’s endangered species.

“It’s a species that’s threatened by invasive fungus called blister rust and blister rust basically kills the tree, so that’s a significant threat to the species,” he explained.

But, amongst infected trees, Parks has noticed there are some trees that appear to be resistant to blister rust.

“We sometimes think of these trees as super trees,” he said. “They have something about them that imparts a particular kind of resistance, so we identify those trees and … climb up the tree and cover the cones with a metal cage.”

The cage protects the cones, allowing them to mature without being eaten by a Clark’s nutcracker, so at the end of the season, they can be harvested. Then the seeds from the “super trees” are sent off to a breeding facility and grown into seedlings.

“Eventually we’ll take those seedlings and our plan is to plant them back on the landscape in Jasper where there’s been heavy rates of infestation from blister rust.

“Now, you can imagine these trees are incredibly slow growing—we have identified individuals in the park that are upwards of 300 years old—so I think I and many of the folks in this room will be long gone before we can assess the success of this restoration effort.”

To provide Parks with feedback on its draft action plan before it is released on the public registry, contact Bird at shelley.bird@pc.gc.ca or Conservation Biologist Brenda Shepherd at brenda.shepherd@pc.gc.ca.

For more information on species at risk in JNP, visit the Species at Risk Act Registry at www.sararegistry.gc.ca.