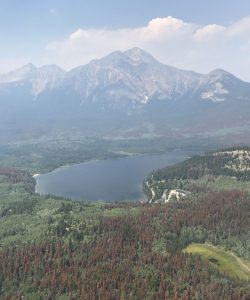 The number of trees killed by the mountain pine beetle is expected to grow exponentially over the next few years increasing the wildfire risk posed to the community. Mark Fercho photo.

While it may be alarming to see Jasper’s pristine forests fall victim to the mountain pine beetle it’s important to remember that the beetle is a naturally occurring species in Western Canada.

In fact the mountain pine beetle epidemic that is sweeping through Jasper National Park should in many ways be a welcomed sign for a forest that is long past its due date.

The problem is that decades of fire suppression has left behind a homogenous forest of lodgepole pine trees that are ripe for the picking, allowing the pine beetle to flourish.

While the current outbreak may not be aesthetically pleasing, in the long-term the beetle will help renew the health and diversity of Jasper’s forests.

“Besides helping forests adjust to changing climate and more frequent soil moisture deficits, pine beetle outbreaks enable more sun and rain to reach the forest floor, increasing the diversity and productivity of understory vegetation relied on by species like elk, bears, voles, etc. The dead trees become habitat for woodpeckers, flying squirrels, owls and bats. There is often an explosion of biodiversity once a pine beetle population eruption passes through an area,” Van Tighem told the Fitzhugh in March 2016.

He said this is exactly what happened in Waterton Lakes National Park, where he worked for several years as a conservation biologist.

In the 1980s a mountain pine beetle infestation killed up to 90 per cent of the trees in many of the stands in the park. About a decade later when he arrived some of the highest biodiversity, watershed values and sheer beauty were in those forest stands.

While the mountain pine beetle may be good for biodiversity, concerns about the heightened threat of wildfire are also valid, however wildfire is always a threat whether there is a pine beetle infestation of not.

During a recent public meeting hosted by the municipality, CAO Mark Fercho told the audience that wildfires fueled by the mountain pine beetle are indeed more volatile, but reassured the public that the municipality and Parks Canada have plans to deal with the outbreak, such as cutting down hazard trees in town and bolstering the fireguard on the bench.

He also stressed that residents can play their part by fire smarting their properties and being prepared to evacuate in case of an emergency.

While the mountain pine beetle outbreak is beyond our control the community can be assured that the powers that be are doing the best they can to control what is otherwise a natural phenomenon.