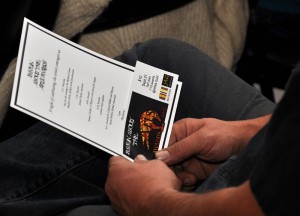 Jasper’s Raven About the Arts Awards are held each September in conjunction with Alberta Culture Days. | N. Veerman photo

After garnering the support of council, Jasper’s annual arts awards have been redubbed the Mayor’s Night for Raven About the Arts.

The annual event, formerly called Raven About the Arts Awards, will celebrate its fifth year this September, once again recognizing Jasperites who make meaningful contributions to the town’s artistic community.

The event was created by Marianne Garrah and David Baker of Habitat for the Arts in 2010 and has seen a number of different iterations since its beginnings as a black tie affair at the Sawridge Inn and Conference Centre; it has fluctuated in size between 40 and 80 attendees and taken place everywhere from the Old Fire Hall to the Jasper-Yellowhead Museum and Archives and the Jasper Legion.

During the fourth annual event last September, Coun. Brian Nesbitt spoke on behalf of the municipality and committed to discussing the idea of a mayor’s night for the arts with council.

On July 21, council unanimously voted to support the event, giving it the mayor’s name and contributing $1,500 towards its organization.

In the future, the event will have its own line item in the culture and recreation budget, but this year it’s unclear where the funds will come from, as the 2015 budget does not include a line for arts and culture, like in previous years.

“Surely in a $13 million budget, we can find $1,500 to celebrate culture in the community,” he said, noting that he is happy to attach the mayoral title to the event, in turn showing council’s support for the arts.

Keeping with tradition, the Mayor’s Night for Raven About the Arts is scheduled for Sept. 25 to coincide with Alberta’s Culture Days celebrations.

The hope is that the long overdue library and cultural centre will be available as a venue, however, it’s current schedule for completion has it opening a week later on Oct. 1.

Although not a guarantee, Mark Fercho, municipal chief administrative officer, suggested during the July 14 committee of the whole meeting that Garrah and Baker secure another venue, but be prepared to relocate, in the event that the cultural centre is completed in time.

Garrah said she liked the idea and booked the Jasper Legion as a placeholder.

Last year, five local artists were recognized during the awards: Marla Pollock for fine art, Brian Lackey for music, Shawna Woelke for choreography, Lena Fraser for theatre, and Deb Joly for photography, while Sam and Shelley Koebel were recognized as patrons of the arts.

The winners are nominated by their peers and selected by a panel of judges.

Nominations are still open for the 2015 awards. Categories include visual arts, dance, music, writing, theatre, and camera—still and motion. A patron of the arts award is also given to someone in the community who is supportive of all things art.

To nominate someone, email arts@iotad.ca.