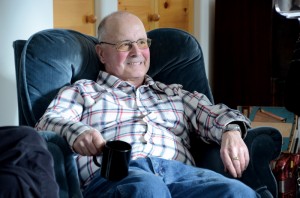 When Albertan adventurer William McGregor climbed to the summit of Whistlers Mountain in 1960, he knew what he had done was significant and felt compelled to share his experience with the rest of the world.

Three years later the construction of the Jasper SkyTram was complete. Since then, more than six million visitors have been able to witness that breathtaking view, thanks to McGregor’s perseverance.

Stories like McGregor’s are common in Jasper. Passed down from generation to generation, each tale woven into the delicate fabric of the town’s history, carefully preserved, to remind the town’s residents of the spirit of adventure and discovery upon which Jasper was built.

But what if you could hear the stories from the founders themselves? What if David Thompson or Mary Schaffer or William McGregor, for example, could be gathered in a room and recorded recounting the stories of how they discovered the pieces that form one of the world’s most renowned national parks?

Six months ago, local consultant Laura Campbell found herself wondering just that. Inspired by the anecdotes of well-known Jasperites Fay McCready and John Ogilvy, Campbell decided to embark on a project aimed at capturing Jasper’s unique history based on the tales of its residents.

“There are so many lives that have been touched by these families in one way or another, and there are so many fantastic stories that people have told me, and to see the people talking about themselves is something we just had to capture,” Campbell explained.

“In talking with people my eyes have really been opened in terms of how many firsts have actually occurred right here in Jasper—how this little mountain town has lead the way in so many facets.”

Under the banner of the Jasper Celebrates campaign, the Devon, United Kingdom native has partnered with cameraman David Baker, and Jasper Short Film Festival organizer Marianne Garrah, to bring the project to fruition.

The trio began interviewing residents in March, when it gathered together a motley crew of long-time ski bums who shared endless memories of shredding the runs at Marmot Basin. Included in that first session were the likes of Joe Couture, Milt Gilmour and Jack Pugh, just to name a few.

And ever since that first gathering, Campbell, Baker and Garrah have received numerous emails, phone calls and messages from other residents who want to share their stories.

The resulting film is slated to premiere at the Jasper Short Film Festival this September.

For Baker, meeting that deadline will mean countless hours of editing. But the former CBC cameraman said preserving a legacy for the community is worth the effort.

“For us, having more material and more resources just means the project will be that much more well-rounded,” Baker said.

Though Campbell, who lived in the community on and off for 20 years before making Jasper her permanent home in 2005, knows the final piece could be a valuable marketing tool for the town, she said her motivation is strictly based on her passion for Jasper and its residents.

“We’ve just got this phenomenal wealth of information,” she noted. “All the details about the landmarks, like Marmot Basin and the SkyTram—we’ve got the bricks and mortar, but in the end it’s the people that made it all happen. It’s the people that have made Jasper what it is.”

To make the project a reality, the filmmakers have started an online fundraising campaign, which they’re hoping will garner them up to $30,000. Anyone interested in donating to their cause or learning more about the project is encouraged to visit indiegogo.com/projects/jasper-stories-from-the-mountains.

Erin Christie
Special to the Fitzhugh