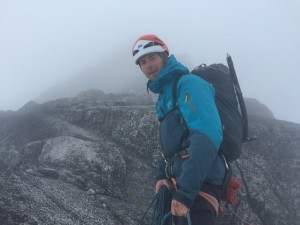 The last picture of Ryan Titchener on Pigeon Spire, in Bugaboo Provincial Park, before his accident on July 15. Submitted photo.

What began as a relatively routine ascent to the top of Pigeon Spire in Bugaboo Provincial Park, quickly turned into a fight between life and death for Ryan Titchener, one of Jasper’s most experienced alpine guides.

Around 8:45 a.m. on July 15, Titchener and his girlfriend, Tereza Turecká, were making their way along the west ridge of Pigeon Spire when a 300 kg boulder came lose crushing Titchener, severely injuring the 32-year-old Jasperite.

With 14 broken ribs, a collapsed left lung and two badly damaged vertebrae, he immediately knew something was seriously wrong.

“The first thought that went through my head was that I was paralyzed,” recalled Titchener, from a hospital bed at the Foothills Medical Centre in Calgary, where he is recovering.

“It was really hard to breath, I could tell I had broken a lot of ribs and my lungs were filling with blood, but I didn’t fully know the extent of my internal injuries.

“The fact that I’m alive is unbelievable.”

Considered a relatively modest climb, the pair were in British Columbia so Titchener could practice his guiding skills ahead of his exam to become a fully certified Canadian alpine guide, a life-long goal of his.

“I was one month away from what I consider to be a 10-year journey. Everything in my life I’ve done up to this point was to take that exam and it sucks it’s going to be taken from me, but if I fight hard and get better than I’ll have a chance to take it again.” 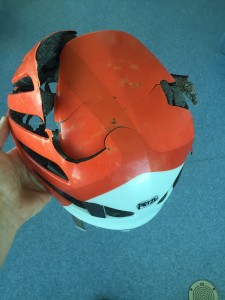 Ryan Titchener’s helmet likely saved his head from being crushed by a 300 kg boulder. Photo submitted.

According to Titchener, the couple had picked a relatively small objective for the day and intended to be back down in time for lunch.

“Essentially I was there to train and get ready for the exam so I was treating my girlfriend like a client and mock guiding her up the mountain.”

After hip belaying Turecká down a relatively short scramble, he started making his own way down the loose rock when things took a turn for the worse.

“As I was down climbing I made my way around this large boulder, which was up and to the right of me and I just happened to touch the boulder with my hand to kind of use it to support my weight as I stepped past it and the whole thing just let go,” said Titchener.

“I could not believe this thing moved. That boulder sat there for 11,000 years and thousands of people have walked by and touched it and it never moved and all of sudden I just happened to move it.”

Watching all of this unfold was his girlfriend, who was only a few metres below him at the time.

“The boulder smashed right into by back and into my chest and rolled right over me,” said Titchener.

“My head went face first and smashed into the rock below and completely shattered my helmet.

“I should be dead. My head should have been crushed.”

Conscious throughout the entire ordeal, his body tumbled nearly 10 metres down the mountain before eventually coming to a standstill, metres from where his girlfriend stood–albeit hanging upside down with life threatening injuries.

“I stopped rolling because one of my feet got wedged in a crack and my harness got hung up on a bit of a horn,” said Titchener.

“I was hanging in this really awkward, semi-hanging upside down stance with a crushed chest and a broken back and I instantly realized I was paralyzed.”

“She instantly went into ski patrol mode and I think that was a huge part of why my life was saved,” said Titchener.

After assessing his mental status and checking him for head injuries, she managed to get him into a more comfortable position using backpacks to prop him up on his side and strapping him down so he wouldn’t slide further down the mountain.

“I was in the most pain I’ve ever felt in my life,” recalled Titchener. “I just remember yelling to her to get the radio out.”

Despite being crushed by 300 kg of granite, the radio somehow managed to survive the impact.

Turning it on, Turecká began yelling, “Mayday, mayday Pigeon Spire” into the radio.

Laying there hoping someone–anyone–heard their cry for help, they anxiously starred at the radio waiting for a response.

To make matters worse, the clouds quickly began closing in on the pair, pelleting them with rain and hail.

“When I saw that green light come on I knew there was going to be a good chance we were going to make it out of here alive,” recalled Titchener.

“That was probably the most pivotal point because at that point we hadn’t made contact with anybody yet and the storm was getting worse and there was a lot of doubt in mind because of the severity of my injuries.”

Cracking across the radio, they could hear two voices talking back and forth to each other confirming what they thought they had just heard.

After a few more minutes, Turecká was in direct contact with one of the radio operators confirming their location, sparking the rescue operation that would ultimately save Titchener’s life.

As luck would have it, a search and rescue team out of Golden, B.C., was training in the valley eight kilometres away.

Using a small helicopter, the team patiently waited for the weather to briefly clear before mounting a rescue operation.

“All we were listening for was that sound of a helicopter,” recalled Titchener, “There was nothing else we could do at that point.”

About an hour and half after first making contact with rescuers, they could hear the helicopter’s swooshing blades approaching and watched it drop off supplies below them.

But with the weather window holding, the helicopter pilot suddenly changed plans, dropping off two rescuers and equipment at Titchener’s feet. 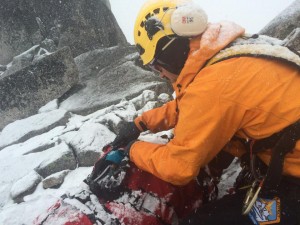 A rescue technician prepares Titchener to be rescued by helicopter. Photo submitted

Almost immediately they began preforming first aid and put him in a vacuum mattress to secure his broken back.

Over the course of the next hour nearly six centimetres of snow accumulated as the group waited for the weather to clear again so the helicopter could return to pick them up.

Wet and hypothermic, things weren’t looking good, but just as quickly as the weather closed in on them it began to clear up.

With a window of opportunity, the helicopter gently plucked Titchener off the ridge taking him to a waiting helicopter in the valley below, where he was air lifted to the hospital in Golden.

In Golden, doctors immediately cut off his clothing and cut into the side of his chest to drain his lungs which were full of blood.

“I just remember the pressure of them pushing that tube between my rib cage and straight into my lungs and the blood just pouring through a tube,” said Titchener, adding they drained a litre and half of blood from his lungs.

After stabilizing him, doctors realized he would need to get to a more advanced hospital so he could undergo spinal surgery. They quickly prepared him to be transported by ambulance to Foothills Medical Centre in Calgary.

“The weather was so bad in the Rockies they couldn’t just helicopter me to Calgary so they decided to drive me there,” said Titchener, adding he got there in two hours.

Arriving in Calgary around 10 p.m. doctors ran him through a series of x-rays, MRIs and CT scans to figure out the extent of his injuries.

The following day he underwent spinal surgery fusing his L2 vertebrae with his L4 vertebrae after removing the shattered remains of his L3 vertebrae.

“My spinal cord was not severed, it was bruised and damaged, but it wasn’t severed, so there’s actually a lot of hope that I could potentially still walk,” said Titchener.

Nearly two weeks after the accident, Titchener was in good spirits from his hospital bed in Calgary, but acknowledged he has a long road to recovery.

“I am a paraplegic right now, for the time being, until I can rehab my lower limbs and the doctors say at this point they don’t know what the future holds, but they’re very, very positive about the outcome of the surgery,” said Titchener, explaining he has limited motor functions below his knees.

Despite his traumatic experience, he said he is optimistic he will fully recover from his accident.

“They said the spinal surgery went as good as it possibly could have gone and they gave me the best fighting chance so it’s up to me now to keep fighting and hopefully I can walk again,” said Titchener.

“This is going to be my Everest.”

To support his recovery people can donate money to his online gofundme campaign: Ryan’s get well relief fund. To date more than $10,000 has already been raised.

A fundraiser and silent auction will also be held at Rockaboo Mountain Adventures, where Ryan worked, August 8 from 4:30 p.m. to 9 p.m.