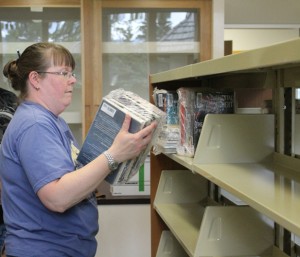 After nearly three and a half years of construction blunders and missed deadlines, library staff officially began to move into the new Library and Cultural Centre, June 8.

For the first time in years the fence surrounding the building was propped open and the front doors were unlocked so staff could begin moving in stacks of books and pieces of furniture into the new building.

For the past five and a half years the library has been located under the bleachers at the Activity Centre as it anxiously waited for the new building, which is located at 500 Robson Street, to be completed.

“We’re looking forward to being in the new space and the opportunities it will present working with other organizations and just having the public come in,” said Thom, as she helped move stacks of books with a team of volunteers.

Municipal council applauded the news during a council meeting, June 7.

“It’s finally happening,” said Mark Fercho, the municipality’s chief administrative officer, who inherited the beleaguered project when he joined the municipality in August 2014.

“Last Friday was our construction completion inspection and the good news is we have posted substantial completion of construction, in other words the building is done,” said Fercho.

With that said, he told council that there are still a few minor things that need to be done, such as fixing a handrail and installing a disabled handle in a washroom, before the public can officially use the building.

“We’re still working with Parks Canada on the occupancy permit and that’s the last big step and that is required to allow the public into the building. It does not affect the move whatsoever,” said Fercho.

“Everything is on track, like the mayor said in the state of the municipality address, the building will be open in June.” 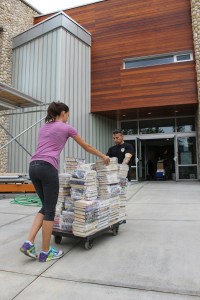 The building was originally slated to open in January 2013, but over the course of the next three and a half years, numerous construction errors and unforeseen issues delayed the project—with the roof, walls, floors, stairs, windows and mechanical system all being improperly constructed and subsequently being rebuilt.

As a result the municipality was forced to keep revising the building’s opening date and conceded the project was at least $1.5 million over budget.

With the construction issues now behind them, Fercho said last week all of the contractors involved in building the Library and Cultural Centre returned to the site to train staff, the user groups and local contractors on how to operate and maintain all of the systems in the building, from the elevators to the electrical system.

He said the Jasper Artists Guild (JAG) and It Only Takes a Dream (IOTAD) will begin moving in shortly, once they sign their 10-year leases, which were presented to council, June 7.

“As soon as we get the groups in, set up, and we get the occupancy permit there will be a soft opening announced for locals to come and visit the building,” said Fercho.

The official grand opening is scheduled for Sept. 30 to coincide with Alberta Culture Days from Sept. 30 to Oct. 2

Leases changed at the 11th hour

“We were totally agreeable on our lease up until yesterday,” said Marianne Garrah of Habitat for the Arts, which is part of IOTAD. “The last four words are to renew the lease annually, but we have a 10-year lease and it can be cancelled by either party within one year so this statement is throwing a wrench into the wording.”

She said IOTAD has no issues with providing council with an annual report about its activities every November, but questioned why those words were added to the lease at the 11th hour.

According to Fercho, council agreed to the leases as they were presented on June 7, but added the condition that all three user groups will have to provide council with an annual report about what the group did last year, its financial statements, and what each group intends to do in the year ahead in order to receive continued support from council.

The intent is the leases would remain 10-year leases, but would be reviewed and renewed annually to increase accountability to the community.

“All groups that receive support from council are now coming to council during the budget process,” wrote Fercho, in a follow up email.

“Last year the library did this, as did Victim Services, the museum will be doing this, and they want that to be more of the standard. It is so all groups that receive support are treated the same,” he explained.

Despite the squabble over the lease, Garrah said she was confident they would find a way to move forward and said she was excited to finally be able to move into the new building.

“The piano is already in there,” said Garrah, adding the organization’s first event is a children’s choir planned for July 4.

The Library, which is the largest user group and includes a partnership with the Association Canadienne-Française de l’Alberta (ACFA), will pay just over $1,500 per month in custodial fees. The municipality will pay for its utilities and AFCA will have its own office in the building.

“The library will be paying the municipality through their dollars, but we will organize the custodial contract,” explained Yvonne McNabb, director of culture and recreation

“That’s an important point,” Fercho jumped in. “Council funds the library’s operations and council also provides the space for the library, but in the lease what you’ll see is a provision in there where they actually give us money back.”

According to Fercho, the money from all three user groups will be pooled together to hire custodial staff to clean the entire building, rather than each group hiring its own custodial staff. He said the agreement with the library is not set in stone and can be revisited every year.

Garrah said IOTAD was initially concerned about having only two months notice if the municipality wants to hold an event, but ultimately accepted the terms of the agreement.

“We were a little concerned about the six events per year that the town can just give us two months notice and use the space, but maybe when they’re using the space somebody will realize that we’re there,” said Garrah.

According to Fercho, his biggest concern about letting the user groups rent out their space will be making sure that each group remains true to its mandate.

“We will not go outside our mandate,” said Garrah.

In September last year, Habitat for the Arts and JAG, submitted letters to council asking for a rental grace period because of the construction delays, which hurt each organization’s ability to generate revenue and apply for grants.

Fercho said that discussion would be brought up further down the road once both groups have signed their leases and it would be up to council to decide whether or not to waive rental fees or defer the monthly payments.

According to Garrah, the municipality is considering deferring its rental payments with interest.

“It’s the last resort we want, but you know what, we’ll take it because quite frankly we’ve been three years without a space to do things and we’ve been paying legal fees and accounting fees and all kinds of fees, so our funding is quite minimal and we’ve had to refuse grants,” said Garrah, explaining the organization had to turn down a $20,000 grant for Culture Days in 2014 because it didn’t have a physical location.

In addition to groups renting out their space to generate additional revenue, the municipality is also looking into acquiring a liquor license for the entire building.

She cautioned that it might not be possible because organizations need to have a membership to get a license, which works for JAG, but not for Habitat for the Arts.

While library staff were busy moving into the new library, the municipality also started moving into its new location in the basement of the building, which includes a large meeting room with a glass wall, a private meeting room for in camera sessions and a kitchen for larger events.

During the meeting several councilors voiced their gratitude to Fercho for finally getting the project done.

“Mark, I want to thank you very much for keeping that project moving,” said Coun. Vonna Arsenault, who sits on the library board.

“When I came on council it was at a very scary standstill and very embarrassing and I appreciate all of your hard work.”

Fercho praised everyone involved, and took the time to specifically mention Gord Hutton, a municipal staff member, for working with the contractors and making sure the building was built according to the contract.

“The completion success is thanks to people in Delnor, Stantec and the municipality that were able to overcome the problems stalling the project and work together to produce a quality building for the community,” wrote Fercho in a follow-up email.

“The finished building reflects the vision of those in town who started this plan years ago.”