You Are Here: Home » Archive » Keeping up appearances 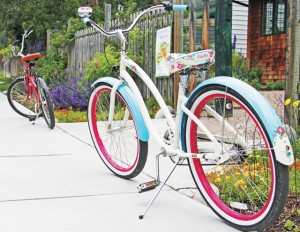 Visitors to Jasper generally come to gawk at the mountains. But, in reality they spend a significant amount of time within the town limits, so the town’s appearance plays a huge role in their overall impression of the park.

A lot of effort is put into making Jasper as attractive as possible, so when some parts don’t live up, people quickly take notice.

When the Connaught Drive Shell Canada station closed its doors last month it became the second vacant gas station on that street, along with the former Esso.

Gerry Lettner thinks a lot about the image Jasper projects. As a member of Jasper’s Communities in Bloom committee he knows how important it is that Jasper be physically attractive.

He said the vacant gas stations have a significant impact on the community, arguing that they leave the impression that Jasper is somehow in decline.

“No one likes to see a main business sector that looks like people are leaving,” he said.

Joe Couture agreed. The vice president of the Jasper Park Chamber of Commerce said businesses should be worried when prominent parts of the business district are left in an unsightly condition. “It does take away from the community when you see businesses closed,” he said.

Marianne Garrah, a local filmmaker and representative of Habitat for the Arts, thinks the issue goes beyond one or two lots.

She said, while there are a lot of beautiful buildings in Jasper, the town’s architecture lacks an overall narrative.

“What’s missing in Jasper is a theme that says: this is what we are,” Garrah said.

The 2011 Jasper Community Sustainability Plan provides some guidance. It lays out the “architectural motifs” that all buildings must conform to. They include features like “natural, or natural looking materials,” “prominent roofs,” and “mountain architecture that creates a sense of enclosure.”

Garrah said the town should work harder to stylize itself around its historic past. Honing in on that thematic vision, she said, will anchor a clear idea of what Jasper is in people’s minds.

She has also argued that further opening the town to artists would have an impact. Buskers, for example, would liven Jasper up and create a more celebratory atmosphere.

Lettner questioned if the gas station land could be put to a better use. He imagined the Imperial Oil lot as a greenspace, or murals painted on the wooden fence that surrounds it.

Those kinds of projects would show that people appreciate this town, he said.

While there are a lot of opinions on what should be done with the vacant lots, the reality is both are zoned for gas stations and leased by major companies, and those companies remain tight-lipped about their plans.

Imperial Oil, which owns the lease on the former Esso lot, said it is in the middle of an environmental assessment and won’t make plans until it is finished. Parks Canada said the company is on a month-to-month lease at least until their assessment is finished.

Shell Canada, meanwhile, refused to comment on its lease, and Parks Canada is still waiting to hear from them. Their lease doesn’t expire until 2043.

Kreizenbeck said since the companies lease the land, they decide what they want to do with it, however, since Parks manages the leases, they have some recourse.

If, for example, the lots sit empty for an extended time, Parks requires the leaseholder to fence in the property with “natural materials” in accordance with Jasper’s architectural motif, like Imperial Oil has already done.

Beyond that, before anything can be done to the lots, Kreizenbeck said environmental assessments need to be finished. If the leaseholders want to do anything but operate a gas station, they have to apply to re-zone the lots, which would go through a public consultation.

Couture said he doesn’t feel wooden fences are a problem for the town’s image, and while Lettner agreed, he said he is convinced the spaces can be put to much better use.