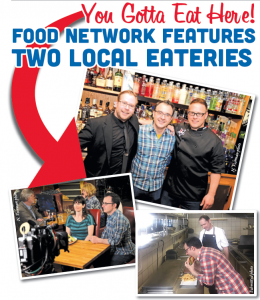 From elk steak to a smoked duck clubhouse sandwich, the Downstream Restaurant and Lounge was serving its finest cuisine for the cameras this week.

That’s because the Food Network was in town taping its final episode of season four for the hit TV show You Gotta Eat Here!

“It’s honestly the biggest compliment we can get as a restaurant,” said Shawn Routledge, manager of the Downstream Restaurant and Lounge.

Hosted by funny man John Catucci, the show travels from coast to coast featuring the best comfort food Canada has to offer.

“I’m honoured,” said Sotirios Korogonas, owner of the Downstream Restaurant and Lounge. “I don’t exactly know the process of the selection, but there are 78 restaurants featured each season, so for us to even be considered, it’s a big deal.”

With massive spotlights littered throughout the dining area, Korogonas admitted he was a bit nervous when he first started cooking.

“When there’s a camera in front of you and you’ve got a really popular comedian asking you questions when you’re trying to concentrate it can get a little nerve wracking.”

Featuring 78 restaurants a season, this is the first time the show has visited Jasper stopping at both the Downstream Restaurant and Lounge and the Jasper Brewing Company.

During each half-hour episode, the show features three different restaurants and blends the quirkiness that is Catucci with some favourite Canadian dishes.

“The food is pretty bang on,” said Catucci, who said he was pleasantly surprised to see the Downstream using a technique called sous-vide.

The method involves placing meat inside an airtight bag to allow it to marinate before placing it inside a bath of heated water to allow it to cook slowly and at an even pace. To finish, the meat is then seared on a grill to lock in the flavours.

To do the taping, the restaurants closed their doors for two days, inviting approximately 60 friends and long time patrons to attend the special occasion.

“They’ve got a good food scene here,” said Jim Morrison, director of the show. “It’s kind of got what you would expect to find in a bigger city in a small town.”

The first day the film crew focused on what happens behind the scenes, from how things are made in the kitchen to how the food is plated. The following day the show interviewed patrons as they ate, asking them what they thought about the food and watching their reactions.

“We don’t go to a city unless it has a great food story.

“We’re looking for really delicious, over the top dishes, homemade from scratch ingredients and any kind of twists on comfort classics.”

The show has done so well that it is now watched around the world, including in Europe, Asia and the United States.

“This is our last episode of the season and I can’t think of a better place than to finish in the mountains,” said Morrison.

There is no set time or date for when the show will air, but Morrison said he expects it to appear sometime this summer.