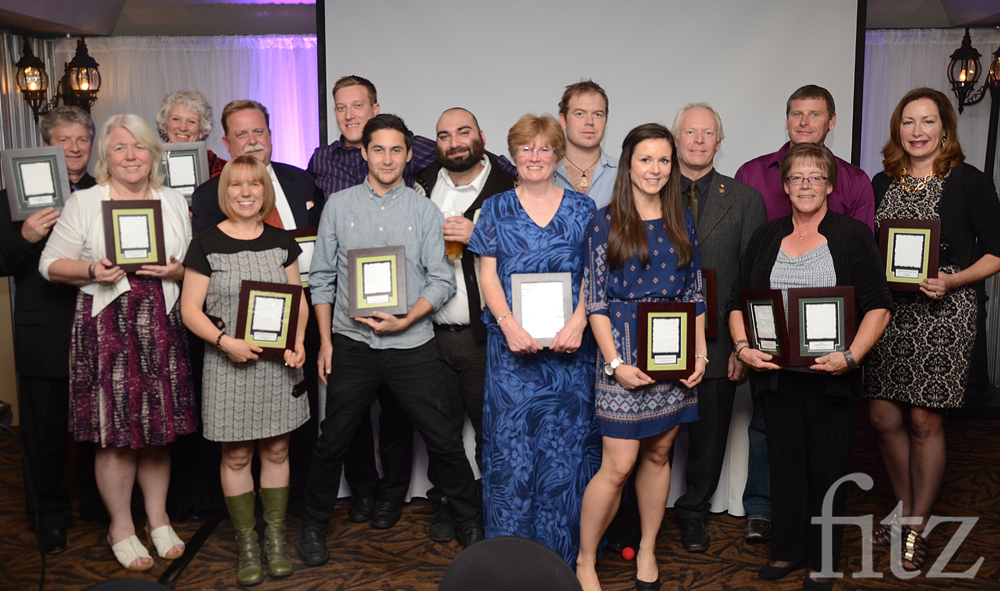 The 2015 winners of the Jasper Park Chamber of Commerce’s business and ambassador awards. | N. Veerman photo

Each October, Jasper celebrates its community ambassadors and outstanding businesses with an awards gala. This year the Jasper Park Chamber of Commerce went “above and beyond the ordinary”—as was the evening’s theme—giving a few surprise presentations, as well as the inaugural People’s Choice Award.

Taking home the People’s Choice Award was Colleen “Corky” Green. She was among eight outstanding community ambassadors on the ballot and was selected by those in attendance at the annual awards gala. She was also the recipient of the Ambassador of the Year Award, as determined by the chamber’s selection committee.

Green, who heads up the municipality’s grounds crew, was nominated for her dedication, passion and never ending energy when it comes to sharing the Jasper spirit.

“Corky can be seen daily helping to keep Jasper’s townsite looking loved,” said Mayor Richard Ireland who read Green’s nomination. “Her attention to detail in her work and her acknowledgement that visuals are important to our town’s destination reputation is second to none.”

Green was nearly speechless when she received the People’s Choice Award.

“Wow. I don’t know what to say,” she said. “Thank you very much everybody.”

As well as the addition of the People’s Choice Award, the chamber also added a few special presentations, including a tribute to its former vice-president, Joe Couture, who passed away in September.

To honour his memory, the chamber’s general manager, Pattie Pavlov, gave out small packets of alphabet soup, representing the numerous boards Couture volunteered for, whether it was the JPCC (Jasper Park Chamber of Commerce), the JHAA (Jasper Home Accommodation Association) or the CSIA (Canadian Ski Instructors Alliance).

“It’s like an alphabet soup,” said Pavlov of Couture’s 50 years of volunteer service on dozens of boards.

“There are people that volunteer and then there are people who are voluntold,” he said to rousing laughter from the crowd. “You laugh, but you know what I’m talking about.

“However there is one individual that seems to be voluntold more often than others. The victim isn’t on the board of the chamber of commerce, [but he] is a member of the chamber by association to small business.

“Rather, he’s the infamous guy who happens to be married to, well, the general manager of the chamber of commerce.”

When he accepted the award, Stephen Pavlov was in stitches, joking that it’s hard to turn Pattie down.

“But in all seriousness, I have volunteered in other capacities in the community for a lot of years. Part of it was with my years with the RCMP, it was always a cornerstone to what we did, not only to serve our communities in a law enforcement capacity, but to be part of your community, and this community has been very, very good to us and as a result I never mind being voluntold.

“By the same token, she knows where I live,” he said with a laugh.

Keeping with the tradition of the annual gala, there were also awards recognizing excellence in business.

This year’s Business of the Year Award went to the Jasper Brewing Co., owned by Socrates Korogonas, Alex Derksen and Brett Ireland.

“The boys, as they are affectionately known, have built themselves quite a list of successful operations through the province, but Jasper will always be homebase and the first to enjoy their creativity and experience their business acumen,” said Chamber President Wayne Hnatyshin, who read the nominations for the award. “Brett, Soc and Alex have nurtured their Jasper property and applied all of their learning to several other successful pubs in Grande Prairie, Calgary, Fort McMurray and Banff, with Edmonton on the horizon.

“Though hometown pride is always a focus for these boys, their entrepreneurial minds embrace that important bit of doing business—giving back and never forgetting where you came from.”

Although “the boys” couldn’t be there to accept the award, they were well represented by members of their team, including Justin Melnyk, who accepted the award on their behalf.

Other business award winners included Alpine Village for the Communities in Bloom Award, the Jasper Adult Learning Council for Non-Profit Organization of the Year, Vanessa Hugie, of Whistler’s Inn, for Individual Award of Distinction, and Liquor Lodge owners Marc and Megan LeBlanc for the Young Entrepreneur Award.