You Are Here: Home » Archive » Jasperites conquer the Great Divide 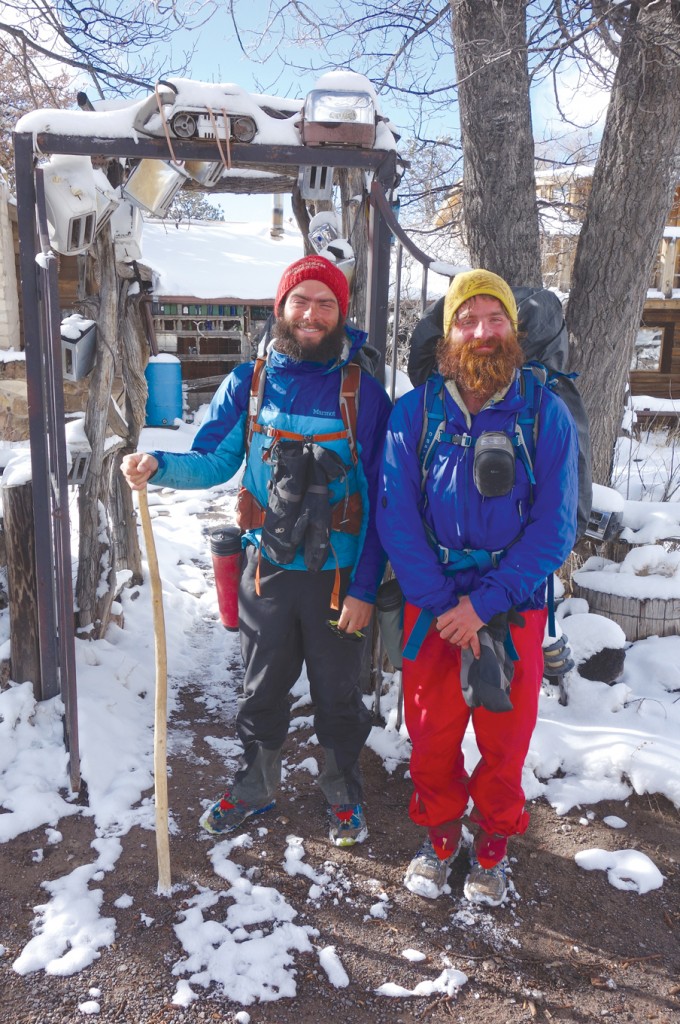 On a dark stretch of highway in New Mexico, two men with tangled hair and bushy beards ambled across the Mexican border, Dec. 31.

They didn’t even realize they had crossed it at first, and it wasn’t until they met border guards that they realized they had officially finished their journey.

Considering what it took them to get there, that end was both surprising and appropriate.

That evening marked the end of Liam Harrap and Jake Alleyne’s 252-day, 5,507-kilometre trek along the Great Divide and Continental Divide trails, from their home town of Jasper all the way to the town of Puerto Palamos, Mexico.

The amount of time, effort, money and planning that got them there made the anticlimax of their arrival surprising. But since Mexico was never really the point anyway, missing the exact moment they reached it was in many ways a fitting end to their journey.

On Jan 19, having arrived back home after a celebratory cruise, the duo took a brief respite, before they had to hop on a bus Jan. 22 to start new jobs at a heli-skiing company.

No longer the wild bushmen that crossed into Mexico at year’s end, both sported short hair and a only a few days’ growth on their faces. They lounged in the SnowDome Coffee Bar, reminiscing about the last eight months living on the trail.

They explained that they had saved and planned for the trip for almost three years before finally setting off, and that the real point of hiking from their hometown to Puerto Palomas wasn’t reaching Mexico, it was everything that happened along the way.

“I think a lot of the time … you get to a destination so fast and you miss all the in between, and with this trip it wasn’t about Mexico whatsoever, it was all about the in between,” Harrap said. 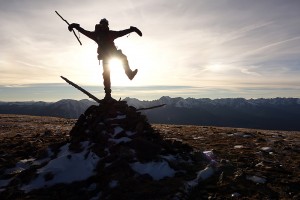 That in-between saw them ski, snowshoe, bootpack and hike through the Rocky Mountains and five US states—summiting 100 mountains along the way. Lugging all their clothing, food and equipment on their backs, they slept, ate and did all their business on the trail, with only occasional stops in towns along the way.

Harrap explained that when you spend that much time in the wilderness, you run into some pretty unique situations.

There was the time they hitched a ride in the back of a pickup truck next to a dead bear in Idaho. Or when they stumbled upon a disoriented firefighter lost on the trail, babbling into his radio and shivering in the sub-zero temperatures.

Or the time Alleyne had to choke down a bowl of noodles made with contaminated water. They hadn’t realized it when he first started cooking, but once they added milk to their tea, it curdled in thick, chunky layers.

“I still ate [my dinner], but I tried not to chew, I just swallowed as soon as I could,” Alleyne recalled, a slight grin on his face.

Listening to one of the friends tell a story means listening to them both tell it. They jump in and out of the narrative, adding points and clarifying details. They often glance at one another as they talk, one silently confirming the facts of the tale.

When they talk about finally shedding their bushmen beards, for example, they seem so in sync you almost expect them to starting reciting the words in unison.

At the end of their trip, they sat in a barbershop waiting to shed their eight months of growth. When the barber finally got to them, he sheepishly admitted his wife had asked him under her breath why two homeless men were in the shop, and if she should call someone.

“It was weird in the barber’s because we were surrounded by people that I would say didn’t need a haircut whatsoever. Not even close. And then there’s us with like…” Harrap shook his hands and bulged out his eyes.

“It was horrifying,” Alleyne chimed in. 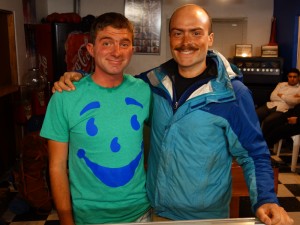 While a shave and shower might have been the first step towards integrating back into society, both agreed that life in civilization has been a little overwhelming.

“I’m kind of stressed a lot more easily now,” Alleyne said. “When I had to be here at 2:00: that’s stressful, or taking the bus or buying tickets. The simplest things are just so stressful now.”

“I’m thinking of all the stuff I have to do before I leave, which isn’t even that much, but I keep thinking ‘oh my God I’ll never be able to do it.’ Time wise, it’s so overwhelming.”

Harrap explained that being on the trail, time doesn’t really matter. They were in charge of themselves, setting when they wanted to get somewhere, or how long to walk.

“If we end up leaving later we just walk later. It doesn’t matter.”

It’s a simplicity that comes from literally wearing your house on your back. Lugging their homes with them for eight months changed the way they looked at the world, and Alleyne said the long hours on the trail gave them both plenty of time to think, although he jokingly admitted his thoughts were “mostly about food.”

“It was easy, and simple. It was just such a simple life. Day to day it was just really simple,” he said.

And while both claimed the hours and hours of silent contemplation didn’t lead to any major life revelations, they did take a few practical lessons away from their trip. A big one being that most people have no idea what they’re talking about.

“I feel terrible saying this but a lot of people, they’re advice was totally useless,” Harrap said. He added that even locals can be wildly uninformed, sometimes insisting to them that the Continental Divide passed through states it doesn’t even touch.

“You also always hear wherever you are that it’s the coldest place in the states,” he said with a laugh.

Again and again the pair thanked Jasperites for all the emotional and financial support they provided them on the trip. They said it wouldn’t have been possible without that—and even though they’re not sure what, if anything, their next adventure will be, they are sure Jasperites will once again be there for them in droves.