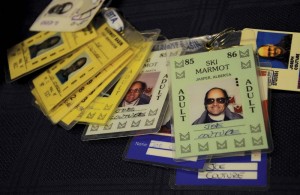 Joe Couture, who ran the Marmot Basin Ski School with Tom McCready, saved all of his ski passes, creating a case study of the changing style of glasses, hairdos and ski get-ups over the years. N. Veerman photo

Back when Baxter’s was the Sunset Ice Cream Parlour and Kay Baxter was there slinging treats to travellers who hopped off the train or to movie-goers after a flick, the shop would serve its famous chocolate layer cake.

It was a succulent, rich dessert that attracted locals and visitors alike and sold for 10 cents a slice.

Although it’s been decades since then, Baxter again enjoyed a slice of his mom’s cake, Jan. 21, this time made by Marianne Garrah for the Jasper Stories event at the Jasper-Yellowhead Museum and Archives, and he also got to share his stories of the old Sunset Ice Cream Parlour in front of a crowd of more than 80 Jasperites.

His stories, as well as many others from Jasper’s old timers, were captured on film by Garrah, David Baker and Laura Campbell to commemorate Jasper’s past through the memories of the people who were there to watch it unfold.

The film, which debuted that night, was the result of 12 months of interviews and many hours of careful editing to pair grainy, old black and white photos with each of the stories.

It was those photos that had the crowd stirring with excitement, as spectators whispered, “Hey, that’s so and so!”

As well as stories of the ice cream parlour, Jasper Stories also includes memories of skiing at Whistlers Mountain, before Marmot Basin opened, and of watching Toni Klettl—one of Jasper’s true pioneers—as he straight-lined a ski race, only to come to a crashing halt after catching huge air.

And there were also memories of the days before Jasper had a proper fire department.

Fire Chief Greg Van Tighem explained that in the early 1900s, there were no fire alarms or 911 services, so as soon as a fire broke out, people would be out of their houses running and screaming for help.

“Back in those days, every able-bodied person would help out,” he said. “It was all hands on deck.”

Shannon Wall also shared a story of her mother’s $2 bike: Tank. According to Wall, it was already a beast, but that didn’t stop Rosemarie from loading the kids into a basket fastened to the front. She took the them everywhere in that basket, even to and from Old Fort Point—pedalling her heart out on the way home.

Following the screening, Campbell was beaming with pride. She said she hadn’t anticipated such a massive turnout, nor did she anticipate the overwhelmingly positive response from everyone who shared in the experience.

It was a night to remember, not only for her, but for those who filled the museum and shared a few laughs and memories of days gone by.