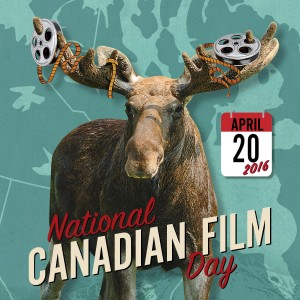 On April 20, Habitat for the Arts in conjunction with Reel Canada will be showcasing eight Canadian films to celebrate National Canadian Film Day.

The annual event, which began in 2014, has grown in leaps and bounds both in Jasper and across Canada over the past three years.

In recognition of its growing popularity, Habitat for the Arts added five more movies to this year’s lineup and two new locations to its schedule of events. All eight movies are free of charge.

“This is a chance for people to see movies they may not ordinarily consider,” said David Baker of Habitat for the Arts.

Not only is the event about supporting Canadian talent, it’s also about sharing Canadian stories.

“The depiction of Canada through Hollywood has often been based on misinformation, misconception and a lot of artistic license,” said Baker. “Our stories are as interesting, as entertaining, as funny, as sad, as thought provoking as anything that comes out of Hollywood.”

To add to the experience, Habitat for the Arts tried to pair each movie with the right location.

For example, Hyena Road, which will be shown at the Jasper Royal Canadian Legion at 8 p.m. is a war drama about Canadian troops struggling to complete construction of a crucial highway in Afghanistan, while under constant threat of a Taliban attack.

At the Alpine Summit Senior’s Lodge, two films will be shown starting with Bye Bye Blues at 3 p.m.

Bye Bye Blues is a story about a woman who joins a local dance band during the Second World War to provide for her family while her husband is at war. A romantic encounter with one of the band members throws everything into question when her husband returns.

The second film, Still Mine, is an enduring drama about an elderly couple who fights against local authorities in rural New Brunswick to build their retirement home.

“I think there is a real unifying factor when you go to the movies and see things you wouldn’t ordinarily see or wouldn’t ordinarily laugh at, or think of or dare to express,” said Baker, adding there will be lots of free swag this year from t-shirts to buttons.

Last year there were more than 170 screenings across the country in every province and territory. This is the third year Jasper has participated in the national event. 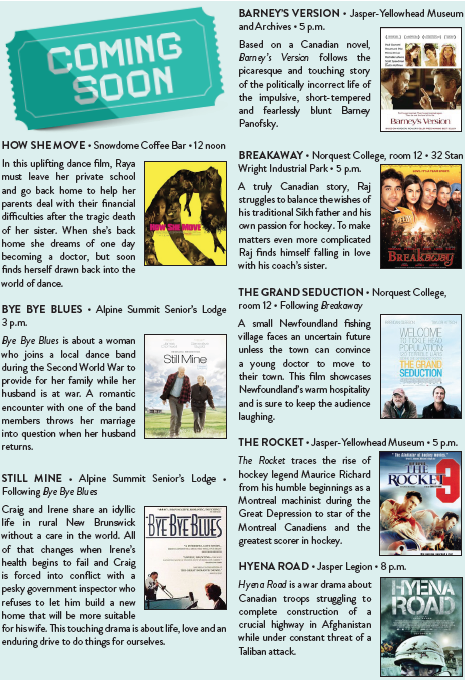