You Are Here: Home » Archive » Jasper library on track for Oct. 2 completion date 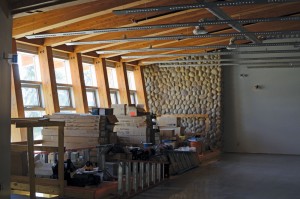 Construction of the long overdue library and cultural centre is in its finishing stages and is on track for its Oct. 2 completion date.

“Essentially we’re in the finishing stages where we’re painting, putting flooring in and doing all of the ceiling tiles,” said Jeff Sterling, director of operations for Delnor. “And with the outside, landscaping is now happening, the concrete is now finished and the paving will be done before year’s end.”

According to Sterling, on any given day, there are anywhere between 15 and 25 trades people—from painters to drywallers, millworkers and landscapers—working on the building to ensure it’s done in time for October.

Currently, the second floor is nearly complete, with paint on the walls and the concrete floors polished.

“Over the next four weeks, what we had on the second floor we’ll be doing on the next two floors,” said Sterling.

It’s been a long process to get to this point, with numerous construction errors and unforeseen issues along the way. Construction began in November 2011 and was supposed to be completed by the following winter, but nearly three years after that initial completion date, the building is still under construction.

Over the past four years, the roof, walls, floors, stairs, windows and mechanical system have all been improperly installed and subsequently redone.

Last July, the budget for the centre was again increased to $9 million, with the caveat that it will most likely reach $9.5 million before the project is complete. Currently, that puts the project $1.5 million over its original budget of $7.5 million.

The increases came gradually, with the first million stemming from issues with the old library—a heritage building that, according to federal regulations, must be preserved and maintained as closely to its original form as possible.

From there, everything fell apart, beginning with the mechanical room. Then came issues with the roof, which resulted in the cedar shakes and shingles being removed to allow for a vapour barrier to be installed.

The walls were next in the long line of construction blunders; they were meant to be left as sealed architectural concrete, but at some point down the line, they were covered with an additional layer of concrete. To rectify the issue, the contractor had to grind the extra layer off the walls.

The most recent string of issues include uneven floors throughout the new building, windows without a proper design and the improper placement of joints for the stairs at the front and back of the building.

Fixing the floors and walls was a huge undertaking that is now complete.

The municipality provided the latest completion date of Oct. 2 in June after further delays put the project behind its projected September opening. 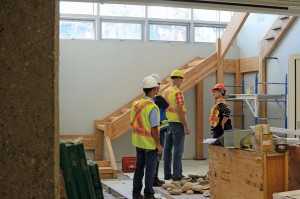 When the building is complete, it will house numerous arts and culture organizations, including the Jasper Artists Guild, the Jasper Habitat for the Arts, the Association Canadienne Francaise de l’Alberta (ACFA) and, of course, the library. There will also be an office for the mayor, as well as a new meeting room where council meetings will be held.

After touring the building, Aug. 18, members of the ACFA were full of excitement about their new office space.

“It’s just so great to touch the walls, walk on our floor,” said Caroline Roy. “We’re all dreaming about what we can do, what colours and what kind of furniture we can put in.

“It’s a long time coming that we’ve been waiting for this. We’re all excited.”

The ACFA, which moved into a temporary space in the new Jasper Joint School Facility in September, is looking forward to using its new office space to increase its visibility, so that people in the community—both residents and visitors—know there are French services available to them.

Marianne Garrah of Jasper Habitat for the Arts was equally excited about the endless possibilities that the new building will present Jasper’s arts community.

Habitat will have a large space in the building complete with an audio/visual studio, a recording studio, pottery studio, performing arts space and an office.

Garrah said her closets are currently full of equipment and art supplies to use in the space and she can’t wait to dust it all off.