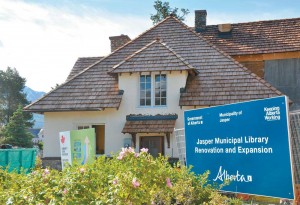 The library and cultural centre’s incessant delays have forced Jasper’s arts and culture groups to be resourceful as they wait for their new creative spaces to be completed.

The latest delay—created by a domino effect of other setbacks—was announced to council last week, forcing the groups to reevaluate their future plans yet again. This time, the setback is comparatively minimal, with the new opening date being pushed back to Oct. 2 from Sept. 1. But, for Jasper Community Habitat for the Arts, which hosts events for Alberta Culture Days each September, it throws yet another wrench in the works.

Over the course of the past two and a half years, as it’s waited for the centre to be completed, Habitat for the Arts has hosted events in every imaginable space in town, as well as cancelled numerous other events and watched grant money—to the tune of $20,000—slip through its fingers because the studio space it was promised is still incomplete.

Habitat’s plan is to use its new space as a site school, where budding artists, as well as experienced artists, can work on everything from performing arts to pottery. In anticipation of the completion of the library, the not-for-profit shut the doors on its old arts centre in 2012.

“At present we are not able to plan programs for the centre as we have no firm opening date,” wrote David Baker, of Habitat for the Arts, in an emailed statement. “We cannot apply for funding for equipment as we currently have no permanent home for the activities related to our funding applications. As well, the thousands of dollars in purchased and donated equipment already acquired for the centre have become obsolete and will no longer be useable for any of the programming we plan to offer.”

Baker said although the organization has done its best to stay positive, without being able to apply for funding and without a space to host revenue generating events, it’s concerned about the future, with or without the space.

The Jasper Artists Guild has also faced challenges, moving its gallery five times—relying on the kindness of local business owners, who have provided space at little to no cost. Currently, the gallery is located in its old home: the Jasper Heritage Fire Hall and it will remain there until August, thanks to Parks Canada.

According to Claude Boocock, JAG’s vice-chair, it’s unclear where the arts group will move in the interim as it waits for the new October opening.

Since construction began in 2011, the Jasper Municipal Library has been tucked under the bleachers at the activity centre, despite expecting to be there for less than a year, and during that time, books, furniture and supplies have been stored in homes across the community, as everyone waits for the new space to open.

L’Association canadienne-française de l’Alberta (ACFA) has also moved, creating an office in the new Jasper Joint School Facility, on the École Desrochers side. Although now closer to the French community, because of limited space and a lack of visibility, the ACFA has had to limit its programs and services.

“We have a lot of resources—like books, CDs, movies—but they are now in storage until we have enough space to have them,” said Valérie Chérétaki, regional director of the ACFA.

The library and cultural centre’s new opening date is Oct. 2, a month later than last reported and nearly three years past its original completion date of December 2012.

Although each of the building’s prospective inhabitants is frustrated by the wait, the groups remain excited about the prospect of having a permanent space to call home.

Boocock said JAG’s slow months are in the winter, so it will be challenging to move in and begin paying rent in October, but despite the financial constraints, the guild is enthusiastic to host special events to make up the difference.

“Having a space to hold special exhibits during the quieter months brings forth the positive creative energy our membership is known for,” she wrote in an email.

“JAG has been pretty resourceful so far; we have moved five times over the past three years. It will, however, be wonderful to nestle into a permanent home, which we hope can be the Jasper Library and Cultural Centre.”

Chérétaki was similarly enthusiastic about the increased opportunities the centre will provide.

“Our new space will increase the visibility of the ACFA in the community and we would be able to centralize, improve and diversify the French language services in Jasper.”