You Are Here: Home » Archive » Jasper cyclists pedal 700 km from Hinton to Coleman

In a small town filled with avid cyclists, it’s no surprise that a handful of Jasperites recently took part in what is being called one of the most challenging mountain bike rides in the Rockies. 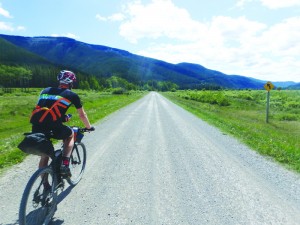 Jasper Park Cycling Association president Matt Staneland was one of several Jasperites to participate in the inaugural Alberta Rockies 700, which kicked off June 19. Submitted photo

The inaugural Alberta Rockies 700, which kicked off June 19, had about 40 riders pedal a grueling 700 km across a mostly gravel route from Hinton to Coleman. Adding to the struggle, the ride was completely self-supported, meaning no outside help was permitted along the way.

The first Jasperite to finish the race was Chris Peel, who crossed the finish line in an impressive time of two days and 18 hours.

“My goals going in were to finish and to stop very little. I think over the three days I only got about two to three hours of sleep. It got a little lonely, but I just kept pushing it,” said Peel.

Aside from some long stretches of solitude, Peel said he had some challenges with his sense of direction.

“There was a few times where I was just lost in the middle of the night,” Peel said. “I never felt like I was in danger, but I’ll probably use a GPS next time.”

Rather than aiming for a record-breaking time, Jasper Park Cycling Association president Matt Staneland said he took his time finishing the 700 km race.

“I got a good friend from Ontario to come out and we weren’t really racing we just went for huge rides every day and camped out and hung out,” Staneland said. “That was the cool thing about that event you could do whatever speed you wanted.”

Staneland completed the route in about four days.

“It was still extremely challenging but I thought it was a great ride for all different abilities,” Staneland said.

The race was organized by Hinton’s Jonathan Hayward, who dreamed up the race after participating in a similar event in Oregon.

“I started looking for something that would provide a similar challenge, but was closer to home,” Hayward said. “I didn’t really find anything so a couple of friends started telling me I should organize my own event.”

Over the course of two years, Hayward mapped out the 700 km route—finally deciding that the combination of logging roads, secondary highways and gravel parkways that stretch from his hometown to Coleman was the perfect setting.

When he first announced the race Hayward said he wasn’t sure how many people would participate.

“Originally when I put together the idea I said I’d be happy if it was just myself and about five others so I was really surprised when that many people signed up,” Hayward said. “Overall everything went really well. I had a lot of riders telling me it was one of the most challenging routes they’ve ever experienced.”

Out of the 40 or so cyclists who participated, 14 were unable to complete the 700 km route.

Calgary’s Dallas Morris was the first to cross the finish line with a time of about 38 hours.

“That guy is a superhuman or something,” Hayward said.

While Hayward doesn’t know if he’ll be the one organizing next year’s Alberta Rockies 700, he said after this year’s successful debut he believes the event is here to stay.

“It doesn’t really take that much to organize,” Hayward said. “As long as there’s a date out there then I think people will come.”