You Are Here: Home » Archive » Jasper Community Habitat for the Arts up for Cities for People award 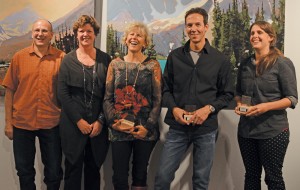 Winners of last year’s Raven about the Arts awards, which took place during Jasper Culture Days 2014.

Jasper Community Habitat for the Arts has been nominated for the Cities for People Award for its work organizing Jasper’s Culture Days last September.

The award is given out by Culture Days, the non-profit organization that has been facilitating celebrations of the arts in communities across Canada since 2009.

According to the organization’s website, the new Cities for People award will “recognize exceptional leadership and innovation in implementing a collaborative arts or cultural activity/project during Culture Days 2014 that aims to transform the livability of a neighbourhood, community or city for fellow citizens.”

Jasper’s participation in the fifth annual Culture Days was almost entirely due to the work of Marianne Garrah and David Baker, the driving force behind Habitat for the Arts.

“I think it’s recognition of a successful animation of town, for Culture Days,” said Garrah. “I think it shows that we try to be as inclusive as we can … and as much as we can we try to create an encompassing program for people to play with.”

Last September’s celebration featured a “sketchers crawl” hosted by the Jasper Artists Guild, a community culture fair in the Jasper Activity Centre, the ever-popular Bowls With Soul dinner, a drumming workshop, the Raven About the Arts Awards and much more.

“I think the big win here is that this is something that you have to be nominated for, and a community member nominated a community arts organization for the award, and that’s kind of an indicator that you’ve put something out into the community and it’s come back this way,” Baker said.

That community member was Nancy Addison (known for the home concert series she puts on each year), who said she wanted to give Baker and Garrah the nod because of all the hard work they both put into fostering Jasper’s artistic community.

“They are amazing people. We are so lucky to have them. They need to be recognized, and that’s why I nominated them,” she said.

She said she has always been impressed by Garrah’s seemingly tireless promotion of Jasper’s artistic community, and saw this award as a means of getting her a little more recognition for what she does.

“She’s got a passion—and she brings so much to the town, she blows me away. I just think she’s probably one of the most unrecognized people in this town, for what she does.

“She and Dave are the power behind the art life in Jasper—at least that’s how I see it.”

The award, along with several other Culture Days awards for 2014, will be given out at an awards dinner at the 2015 National Congress on Culture. The winner will receive a $1,000 cash prize, be showcased in national media and participate in the Congress in May.

Garrah said winning the award would help promote Jasper as an arts destination, both through exposure and by making it easier for Habitat for the Arts to obtain grants and funding for future projects.