You Are Here: Home » Archive » Jasper artists recognized for their talent

Jasper artists recognized for their talent 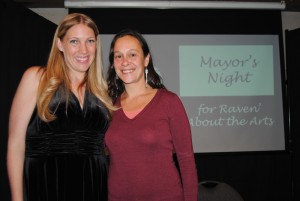 Five women were recognized for their contribution to Jasper’s arts scene during the Mayor’s Night for Raven About the Arts, Sept. 25.

The annual event, which was formerly called Raven About the Arts Awards, was organized by Habitat for the Arts and coincided with several other Culture Days events over the weekend.

Organizers renamed the event after the mayor and council unanimously voted to support the awards in July, giving the event the mayor’s title and contributing $1,500 towards the organizational costs.

The funding helped fill a massive hole in the organization’s budget after it failed to secure a $5,000 grant from the provincial government that it had come to rely on for the last five years.

In recognition of its new name, Mayor Richard Ireland opened the evening with a few comments followed by the recital of a poem he wrote.

“This year, thanks primarily to Marianne Garrah, the municipality has the honour of officially supporting the event and hopefully taking some of the stress of the financial worry from Marianne’s shoulders,” said Ireland, referring to one of Habitat for the Arts’ directors.

Ireland stressed the important contribution artists make to the health and vibrancy of the community and congratulated this year’s winners.

Stephanie Marr was first to be recognized with the theatre award. Marr is perhaps best known for playing Edith Cavell this summer and will be one of six local actors performing in the Seniors Monologues at the Alpine Summit Seniors Lodge Oct. 1.

“It’s pretty cool to be recognized by the theatre community,” said Marr, who also performed with an improv group during Bowls With Soul on Sept. 27.

“I never thought it would be me.” 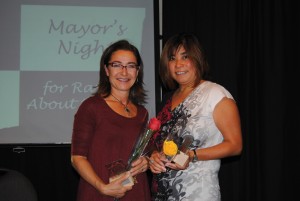 Santina Cross was next to be recognized with the writing award. Cross recently published a book called Chakra Sun Signs. The book was illustrated by Jasper artist Marla Pollock and explores the way the chakras connect to astrology.

“I’ve been working away at it very quietly for many years and it’s nice to finally have a little spotlight on it,” said Cross, in reference to her book.

Cross is also the brain behind Seniors Monologues, a collection of monologues that she will narrate on National Seniors Day. According to Cross, she spent the past two years interviewing seniors and compiling their thoughts, dreams and wishes with the hopes of one day turning those interviews into a play. It will debut Oct. 1.

Noriko Stevens accepted the dance award and entertained the audience later in the evening with an improvised dance with Chad Krayenhoff, who she runs the Jasper Blues Dance Community with at 4Peaks Night Club every Thursday from 4 to 9 p.m.

“I’m feeling honoured,” said Stevens. “This is a really new thing for me and I wasn’t really expecting it.”

Cheryl Potter was awarded the fine art award for her artistic talents. Potter is a member of the Jasper Artists Guild and part of the gallery committee responsible for setting up the new art gallery when the organization moves to its new location in the soon-to-be-completed library and cultural centre.

“It’s really nice to live in a supportive community and it’s always nice to get an award,” said Potter.

“It makes you feel like at least what you’re doing is going in the right direction and you’re supported.” 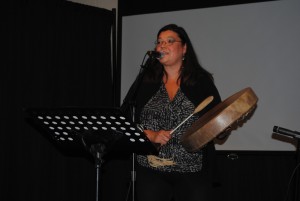 Singer and songwriter Matricia Brown was recognized with the music award for sharing her Aboriginal culture through drumming and singing. Jasperites might know Brown and her daughter, Mackenzie, as the Warrior Women. The duo recently played at the Jasper Folk Music Festival.

Brown also took the opportunity to perform two of her songs during the event, including a cover of “Hallelujah” by Leonard Cohen.

To break up the evening, several other local artists took the stage.

Marie-Hélène Hamel, who has previously been recognized for dance, sung three Spanish songs with her ukulele, while Lena Fraser, who won the theatre award last year, performed a monologue as Edith Cavell.

The final award of the night—the patron of the arts award—was given to Nancy Addison, who was unable to attend the event.

“We have some really talented people living here,” said David Baker, of Habitat for the Arts. “We love to see the arts alive in the community.”