You Are Here: Home » Archive » ‘It’s for my own mental charity’ Man seeks solace on cross-country walk 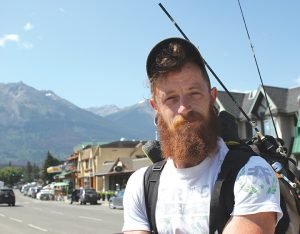 Ryan Steer is walking across Canada in search of clarity in his life. He arrived in Jasper on July 14. P. Clarke photo.

Everyone deals with heartbreak in different ways.

For some they reach out to friends and family for support, for others, like Ryan Steer, they decide to walk across Canada.

The 29-year-old Brantford, Ont., native left Vancouver on July 2 and through a combination of walking and hitchhiking made it to Jasper on July 14.

“It’s for my own mental charity,” said Steer. “If I don’t start donating to myself I’m going to lose my marbles.”

Carrying about 85 pounds of gear on his back, he said the trek has been grueling so far as he’s had to deal with soaring temperatures, mosquitos and smoke from the wildfires burning in British Columbia.

“Right now I’m a little exhausted,” said Steer, who has been random camping along the way.

“When I get out there on the highway it’s hours before I get picked up and with me being a fair skinned individual it really, really kicks my ass.”

The impetus to begin the 7,000 kilometre journey to Newfoundland began nearly four years ago when Steer broke his ankle playing for the Vancouver Street Soccer League (VSSL).

“I was actually suppose to go to Poland to play with team Canada on the VSSL but at the qualifying tournament I snapped my ankle and that’s what sent me home,” said Steer.

Picking up the pieces he spent the next four years in Brantford where he fell in love with a woman.

“I got into a pretty serious relationship, but it fell apart and really caused me a lot of mental anguish so I figured it was best for me to get out of there before I lost my mind,” said Steer.

As luck would have it his friend invited him to live on Hornby Island, in British Columbia but three months in he got itchy feet and decided it was time for a radical change – a trip across Canada on his feet.

“I doubted myself all the time with almost everything I did,” said Steer about his previous life in Brampton. “After the whole thing with my ex I lost a lot of self respect and just felt like I couldn’t accomplish anything without her or without some sort of support, but I’ve done this all by myself.”

Reflecting on his journey to date he urged anyone who was struggling like him to stop dwelling on the past and make the most of life and by all accounts he’s doing just that.

While in Jasper he made the 80-foot jump at Horseshoe Lake and even managed to get in a baseball game with the local slow pitch league.

“Regardless of what you feel you may not be able to do, the world’s yours and you only get one shot at life so take it and don’t waste it.”