Provincial election set for May 5

So far,  the Fitzhugh has confirmed three candidates running in the West Yellowhead riding: Progressive Conservative incumbent Robin Campbell, Wildrose candidate Stuart Taylor and NDP candidate Eric Rosendahl.
Campbell, who has been Finance Minister since Prentice took power in 2014, won the 2012 provincial election with 44.86 per cent of the votes. Taylor, a current Hinton town councillor, ran against Campbell that year and garnered 26.91 per cent.

Rosendahl ran in the 2014 federal byelection after Rob Merrifield resigned. He garnered 9.55 per cent of the votes, losing to Conservative candidate Jim Eglinski. 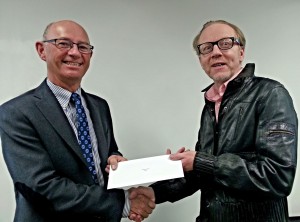 Stay tuned for election coverage in the coming weeks and for information about an all-candidates forum organized by the Jasper Park Chamber of Commerce and the Fitzhugh.

Mayor Richard Ireland has committed to a new kind of poetry challenge next year—one that will have him extending it to his peers.

Jasper has been participating in the Mayor’s Poetry Challenge for the past few years, each April welcoming a local wordsmith to share a poem during a council meeting, but next year—on the request of the Jasper Habitat for the Arts—Ireland will be turning that challenge around, asking mayors from across the country to write and perform their own original works.

This isn’t a far stretch for Ireland, who’s been known to craft both humorous and touching poems for community events, and it was with little hesitation that, when asked by Marianne Garrah of Habitat for the Arts, he agreed to participate.

This year’s winner of the Mayor’s Poetry Challenge was Stephen Nelson, who performed for council on April 7. Nelson was selected by a small panel of judges during an open mic poetry night at the SnowDome Coffee Bar last month.

As well as performing for council, he received a small honorarium and his poem, Jasper Paradise, was printed in the April 2 Fitzhugh.

The event, which includes a silent auction and entertainment by the Madson Brothers Band, will raise funds for the shelter, which services the entire region, including Jasper.

The shelter opened its doors in 1985, providing short-term, safe accommodation for women—either with or without children—who are fleeing family violence.

In 2014, 134 women and children utilized the shelter and approximately 900 crisis support and information calls were received.

All services are free of charge and are available 24 hours a day, 365 days a year.

The fundraiser begins at 5 p.m. Tickets are $15 each and are available at the Old Grind and Hinton Public Library.