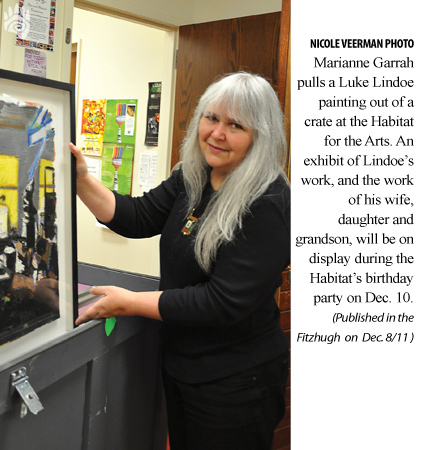 It’s been a year worth celebrating for Jasper’s Habitat for the Arts – a year of artistic exploration, growth and community building.

“It’s amazing to think we survived a year,” said Marianne Garrah, a director for Habitat. “But at the same time it’s just a year.”

The Habitat opened its doors in the old courthouse building on Patricia Street a year ago last month, and will celebrate its first successful year this weekend.

Habitat for the Arts spawned out of Jasper’s arts community. Garrah said there were many artists and performers in town who just needed a space to spread out and try new things, while also honing their skills. So a group got together and asked the provincial government for the space above the Adult Learning Council, which had sat empty for nearly a year.

After 10 months of waiting, they were given the keys on Oct. 28 of last year. Then, about a week later on Nov. 9, the group held a grand opening.

And ever since the Habitat has been booming with activity, especially the former courtroom.

“This room is probably used nine times in a seven day week,” said Garrah, while looking through paintings for an upcoming exhibit. The multi-purpose space has been used for art workshops, art parties, jam sessions, exhibits, film nights, slideshow presentations and school projects, among other things.

But that’s only one of the many rooms the Habitat inhabits. There is also a video editing suite, a “tickle trunk” full of theatre costumes, a classroom for workshops, a rental studio and a pottery studio.

Ursula Winkler, Habitat’s visual arts instructor, said the biggest struggle artists face is finding an affordable space to work, and that’s what the Habitat has created.

And by doing that, artists also have a new freedom to try different mediums.

“We’re trying to encourage people to be more playful and try things out,” she said, noting that the arts are a way to promote health, happiness and community.

“This space is about community,” added Garrah. “We’re not here for the tourists en masse. We’re really here to build the community.”

And to do that, “you’ve got to have people, then the place and the process,” she said.

To celebrate a successful first year, the Habitat is having a birthday “arty” on Dec. 10, complete with an author reading by Amber Hayward, a performance by the Jasper Jazz Band, a live art demonstration by Joel Cultur and an artisan market.

On display in the old courtroom will also be a Luke Lindoe exhibit, which features work from three generations of the Lindoe family, beginning with Luke and his wife Vivian, their daughter Carroll Taylor-Lindoe and their grandson Damian Moppett.

“It’s kind of what we’d like to inspire,” said Garrah, “start with us and give it to our kids.”

Next year when Habitat for the Arts celebrates its second birthday, it will likely be its last in its current location, as it will be moving into the newly renovated and expanded library building in 2013.

The $7.5-million library project kicked off in October and is expected to take 15 months to complete.

When finished, the building will house, along with the library and Habitat for the Arts, the Jasper Arts Guild and L’Association canadienne-française de l’Alberta.

Once the Habitat has relocated, Garrah said she hopes to have more of a concrete schedule of classes and events, so the Habitat can act as more of a school.

But those are plans for the future, and right now, it’s time to celebrate the year that’s passed.

Everyone is invited to the Habitat on Saturday to take part in the birthday activities, beginning at noon.

Garrah noted that the event is happening a month late to coincide with the annual Barb Brooks Fundraiser, which raises money for scholarship for emerging artists.

As part of the fundraiser, some of Brooks’ original works will be on sale.

Brooks passed away in 2009. She was a prolific Jasper painter, who inspired and mentored many of Jasper’s artists.