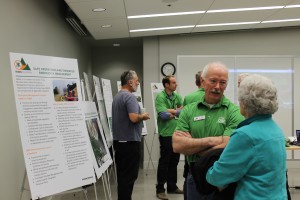 Days after claiming the Trans Mountain pipeline  had never leaked or spilled oil in Jasper National Park, Trans Mountain confirmed six spills have occurred in the park since 1954, including the second largest spill in the pipeline’s history. K. Byrne photo.

A few days after an open house about the Trans Mountain pipeline expansion project it became clear that not everyone received the same information.

On Jan. 26 the Fitzhugh attended the meeting and was told by a Trans Mountain media relations employee that there had never been any pipeline leaks or spills reported in Jasper National Park.

That information was wrong.

After the Fitzhugh pressed the company for more information, Hugh Harden, vice president of operations for Kinder Morgan Canada, confirmed that there have been six spills recorded in Jasper National Park (JNP) since 1954, including the second-largest leak in Trans Mountain’s history.

“We’re more than willing to talk about it. I think in this case it was probably a matter of error or people not being as aware as they should be about spill history and not utilizing the expertise in the room,”  said Ali Hounsell, a spokesperson for the Trans Mountain pipeline expansion.

“So certainly that’s a takeaway for us and we want to reinforce with the residents of the community that we’re more than willing to talk and share information.”

Trans Mountain’s second-largest leak happened on April 29, 1966 near the west gate of JNP according to an academic report commissioned by the City of Vancouver. The leak was caused by a large rock that struck an exposed portion of the pipeline as a result of blasting operations for the highway. It released approximately 1.1 million litres of crude oil.

The same report highlighted another spill within the park less than a decade later. It said a Canadian National Railway worker spotted an oil spill on the Trans Mountain pipeline just inside the park’s borders about 150 yards from the Athabasca River on the morning of June 25, 1973. For 12 hours, the pipeline leaked crude oil undetected, ultimately releasing approximately 125,000 litres over an estimated 200-square-foot area of the park.

The Calgary Herald published an article about the spill on June 28, 1973. In the article Bruce Wilson, assistant park superintendent for JNP at the time, described the situation as “pretty lucky.” He said he was thankful that the spill did not reach the river, but added, “We can’t help but feel that where it can happen once, it can happen again.”

At the time the company attributed the spill to a gouge “most likely made during initial construction in 1952.”

Despite Trans Mountain making its spill history public online, only two of those incidents are clearly identified to have happened in JNP. According to the company’s records, 80  litres of crude oil leaked at the Jasper pump station in 1985. In 1992 another leak at the station released approximately 3,500 litres of diesel.

Data shared privately with the Fitzhugh on Feb. 7 shows several inconsistencies with the company’s online records.

For example, the company’s online records claim a spill occurred on May 12, 1992 at the Jasper pump station, yet the information provided to the Fitzhugh indicates it happened in 1993.

The quantity of several spills were also under-reported online.

Other inconsistencies include a spill that occurred in 1954 near the Miette River. It is not included online because it happened before the National Energy Board began keeping regular records of incidents. According to the company’s online records, another spill occurred in 1965 releasing an undisclosed amount of water. That information was not included in the data shared with the Fitzhugh.

Sean Kheraj, author of the academic report, said in an interview that vague details are common among most pipeline companies, adding that Trans Mountain has one of the most transparent records he has seen.

Trans Mountain spokesperson Hounsell agreed that spill locations can be confusing if you don’t know what you’re looking for.

“The way that locations are talked about on the pipeline is by mile or kilometre post. That’s the way the industry talks about them, however, we have made efforts on our website to try to make it a little more user-friendly,” she said.

Hounsell suggested the locations might even be unclear to some Trans Mountain staff.

“That’s a conversation I actually just had because I said ‘how is it that perhaps people in the room weren’t aware of those other (spills),’” Hounsell said about the open house. “It was pointed out that because we just have this list where many (locations) just say a mile number then Alberta then maybe it’s not as clear as it can be.”

Jill Seaton, chair of the Jasper Environmental Association, said she was aware of the 1985 and 1992 spills because of an online chart, but when she tried to get more information at the open house, she said she was met with a myriad of responses.

“I asked where these spills were and one of them told me that it was probably right around the pump station,” Seaton said. “At one point I had three people around me and I was asking questions and they sort of looked at each other and said ‘I don’t know,’” said Seaton.

She said during the open house, a Kinder Morgan official had also briefly brought up the 1966 spill, however, it was only after doing more research later that she became aware of the spill’s size and location.

“I was not impressed by them at all,” Seaton said.

The response wasn’t surprising to Kheraj, who said it’s common for pipeline officials to not be on the same page during public forums.

“The corporate history has changed, the leadership of the company has changed and the employees have changed,” Kheraj said. “It’s an inherited pipeline and the folks that are going out and doing PR events to provide information are not necessarily conversant of the history of the pipeline.”

“The higher the capacity of these pipelines, the greater the environmental risk even if the spill rate stays the same,” he said.

In his report, Kheraj notes the causes of spills range from operator error to corrosion to landslides.

Overall, there is no identifiable pattern of oil spills on the Trans Mountain pipeline in its more than 60-year history. Instead, oil spills along the pipeline have occurred in a random and sporadic fashion, often the result of accidents, material failures or unforeseen causes, according to the report.

Under NEB regulations only spills into a body of water or spills that are greater than 1,500 litres must be reported. Of the 82 spills, nine exceed that reporting threshold.

“A large number of these spills are caused by a combination of third-party failure or types of material failure that aren’t related to maintenance and are therefore less predictable,” Kheraj said.

“It leaves you with an awkward conclusion that pipeline failures and spills often happen because of accidents, not necessarily stuff that can be prevented through ordinary maintenance or mitigation measures.”