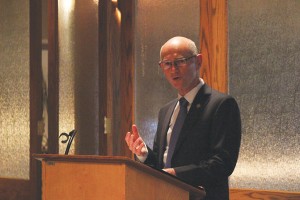 Mayor Richard Ireland confirmed he will seek re-election as mayor if he is nominated. P. Clarke photo.

After months of speculation Mayor Richard Ireland confirmed he will run for re-election if he is nominated.

“I will inform you today that if I am nominated I will accept the nomination to run in the next election,” said Ireland to a roomful of applause.

Several councillors were quick to congratulate him after he made his statement at the end of a council meeting on Aug. 15.

Ireland was first elected mayor in 2001 when Jasper became a specialized municipality and is the only mayor Jasper has ever had.

If he is re-elected on Oct. 16 it will be his 10th term in office since he was first elected chair of the Jasper town committee in 1989.