You Are Here: Home » Archive » History of the point: The Jasper Internment Camp – Part Two

History of the point: The Jasper Internment Camp – Part Two 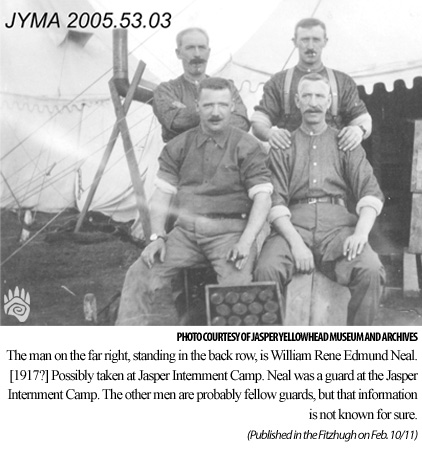 The Jasper Internment Camp was guarded by the Alberta Dragoons. Camp conditions were reported to be poor. The men staged a hunger strike in the spring that wasn’t taken too seriously by the prisoners themselves, or the guards. At one point, the guards allowed two young Jasper girls to sneak in a plate of freshly baked doughnuts. After the strike, the men refused to work altogether.

It was the first time a camp had experienced a strike, and the Parks authorities were unimpressed. Major General Sir William Otter, director of Internment Operations for the Government of Canada, responded by saying the guards were unable to force the men to work. All they were allowed to do was cut back their rations and encourage the men to get back to work. The superintendent of the Jasper National Park unsuccessfully tried to convince the men that the work was for their own well-being, but the men were undeterred given the circumstances.

Major A.E. Hopkins, commander of the Jasper Internment Camp, began to be blamed by Parks authorities for not keeping his men in line, and replacing him was suggested. In May, 27 men were convinced to begin work at a new camp up the Maligne Canyon that would house workers as they pushed the Maligne Lake Road through. Hopkins was concerned about the security, since there was no barbed wire fencing established yet.

On May 23, 1916, Hopkins wrote to Brig. General E.A. Cruikshank, Commanding Officer Military District No. 13, Calgary, to say that three prisoners had escaped from  the Maligne camp. The event took place on May 21. The men who fled were named as Joe Walla, Tony Pyziak and Lorenz Maki, the latter still at large at the time of the letter being written.

The three men were being housed in a tent together and escaped from a latrine that had been established away from the Maligne River, to avoid contamination of the water supply. Maki was captured as Hopkins finished his letter.

The prisoners at the new camp refused to work after the escape until more prisoners were moved into the camp. The total number of prisoners climbed to 50 in June. The men worked on the Maligne-Medicine Lake Rd. They completed a total of two miles of the road including bridges and culverts. One guard reported that the men did nothing without protesting.

General Otter was unimpressed with the continued protests by the men, and decided in August 1916 to shut the camp down. The men were to be transferred to jobs with the railway or other industries. There was a serious labour shortage because many men were overseas serving in the military. Companies that had initially shunned the idea of using immigrant workers now requested their services from General Otter, who was receptive because he feared the strikes and escapes would only escalate.

In April, internees began to be paroled. Before their release, they had to secure a job and promise to remain in Canada, be a lawfully abiding citizen and report to local police. Men that were considered security threats or who had caused trouble while interned were not released. Chronically ill patients were transferred back to the communities that had initially requested they be interned.

Prisoners from Jasper began to leave the camp in August. Ninety men were released on Aug. 16. Many started jobs with the Canadian Pacific Railway, and some began with the Grand Trunk Pacific Railway, local mining operations and farms.

Of the 207 who had been at the Jasper Internment Camp, only 22 remained in custody – that number included the three men who had attempted to escape in the spring.

The camp was only open for seven months in Jasper, and its closure was followed by many other similar camps shutting their doors. The men arrived in Jasper already labelled by the public as “aliens”, and although they built infrastructure in the area and contributed to the makeup of the Jasper townsite, they were not welcomed – in fact when the three prisoners escaped from the Maligne Canyon camp, hysteria rippled through Jasper until they were caught. They then moved on to continue working in Canada on the railroads and in other industries, and to contribute to what created the infrastructure we still use today.