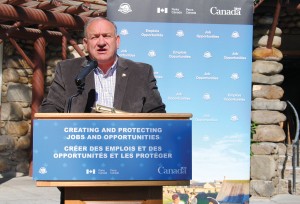 The federal government announced $211.6 million in funding over the next five years for infrastructure and conservation projects in Jasper National Park, July 2.

The money will go towards 26 projects throughout the park, including repairing highways, bridges and campgrounds. Of the more than $200 million, $1.7 million will go toward conservation projects, including protecting the endangered woodland caribou.

“Not only will these investments restore some of the park’s important cultural resources, but they will make an important contribution to local and regional economies,” said Yellowhead MP Jim Eglinski, during a press conference on the information centre lawn.

“The funds have been committed and are set aside,” he said, responding to a question about whether the money is dependent on the Conservative Party’s reelection in October.

“This represents the most significant federal investment in the 104-year history of Parks Canada,” said Eglinski.

The largest chuck of money—$80 million—will be spent on paving and slope stabilization along the Icefields Parkway and Miette Road. Emerald Lake Road in Yoho National Park will also receive some of this funding.

An additional $15 million was also set aside to repair the Icefields Parkway, including new pavement, guardrails, culvert rehabilitation and slope stabilization.

Both Highway 93A and Miette Road will each receive $1 million for urgent repairs.

Greg Fenton, superintendent for Jasper National Park, said he could not provide a timeline as to when each project was expected to begin, but committed to providing a loose schedule in the near future.

He also said Parks is in the process of hiring five or six new project managers to oversee the new projects.

The government also earmarked $32.4 million to repair Highway 16 and committed an additional $26.5 million to repair four bridges along the highway, including the ones that cross Snaring River, Fiddle River, Clarivaux Creek and Meadow Creek.

In all, nine bridges are slated to be repaired along Highway 16 for a total of $57.8 million.

“This was not an add on project,” said Fenton, in reference to a story about damaged road signs published in the Fitzhugh.

“We have had a sign replacement plan that was completed a number of years ago as part of a broader mountain national park initiative. The funds that Jim announced today will allow us to advance that plan at an accelerated pace.”

He said damaged signs along Highway 16 and the Icefields Parkway will be replaced in the next few weeks and new signage across the entire park will be installed over the course of three to four years.

The funding is part of Parks’ plan to invest more than $500 million in highway infrastructure across six national parks in the region.

In addition to the highway repairs, several campgrounds will also receive new funding.

Whistlers Campground, the largest in Jasper National Park, will receive $6.7 million to create additional RV sites, upgrade water and sewer services within the campground and replace campground kiosks. An additional $175,000 will be used to build 10 more oTENTiks at the campground.

Another $1.1 million was committed to paving roads within Whistlers, Wapiti and Wabasso campgrounds, in addition to $808,000 to renovate 41 washrooms at all three campgrounds.

The government also plans to spend $750,000 to repair and improve the Edith Cavell parking area and access road and promised $440,000 to improve trails and parking at the Valley of the Five Lakes.

“Approximately 35 per cent of Jasper’s annual visitors make the trip to Mount Edith Cavell. By investing in infrastructure at this popular area, Parks Canada will ensure long term access to a spectacular destination,” said Eglinski.

Another $1 million will go towards the recovery of whitebark and limber pine trees in mountain national parks.

Left off the list for new funding was money to fight the mountain pine beetle, which has been decimating forests in both British Columbia and Alberta.

“There are some ongoing discussions with the province of Alberta about additional actions that Parks Canada will take in Jasper National Park, given some of the red spots we’re starting to see,” said Fenton.

“We’re in the process of trying to carrying out some surveillance activities to quantify the magnitude of the problem and then discussing what potential control options would be that are consistent with the mandate of Parks Canada,” he said.

Other notable investments include $3.4 million for Parks’ operational buildings, including the Jasper train station and the maintenance compound. Another $1.8 million will be used to repair Jasper’s old fire hall, which is a federal heritage building and a new interpretive cultural centre for Parks.

The government has also promised to spend $1.6 million to rehabilitate the Cabin Lake Dam, which provides water storage for fire protection, and another $500,000 for upgrades to the waste transfer station, including replacing the weigh scale and the electrified fence that keeps bears out.

For more on that story, including community reaction, stay tuned to next week’s Fitzhugh.