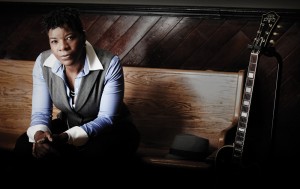 Cécile Doo-Kingué didn’t come to music, she was born into it.

Even when she was in the womb there was music, whether it was her father’s trumpet belting out tunes or her mother’s classical music playing in the background.

“There was always music around and because it’s a large family—I’ve got seven siblings—everybody’s tastes and influences were the soundtrack to my childhood.”

The blues guitarist and singer/songwriter from Montreal credits that soundtrack as the basis of her own mixed style, which covers everything from blues to afro-roots and soul.

When asked what her parents think of her being a musician, she lets out a mischievous chuckle.

“They’re OK with it now,” she says through laughter. “They always encouraged the musical side of me, but they didn’t necessarily encourage the career choice.

“They’re native to Cameroon and they are the generation that fought for independence and for the right for Cameroonians to have access to education, to good jobs. They fought so we wouldn’t have to worry about having access to good professions, that kind of security; so for them to have a kid in school—who’s good in school and shows promise as far as being able to do whatever she wants with her life—to come and say, ‘hey man, I want to throw all that security out the window and be a starving musician,’ they didn’t take too well to it.”

Despite early trepidation, it didn’t take Doo-Kingué’s parents long to realize she had the talent and determination to make it work.

It’s been 20 years since she took the plunge, turning her passion into a full-time job, and she hasn’t looked back.

“I’m one of the lucky ones. I do music 100 per cent, nothing else. I feel very fortunate to have been able to support myself the last 20 years doing what I love.”

During those years, Doo-Kingué has released three albums, including her latest, which dropped in February, titled Anybody Listening Pt. 1: Monologues.

The album is the first chapter in a trilogy that explores blues, roots and life by playing the same songs—first solo, then with a rhythm section and later with an audience—and seeing how they transform.

“It’s to see how our preconceived notion of blues changes depending on who plays it, how it’s played and where it’s played,” explains Doo-Kingué.

“So what might seem like a Mississippi Delta swampy kind of vibe, how does that change when you throw in a drum and bass or throw in an audience? How do our respective moods affect the experience and the tunes?

“I guess it’s an exercise in style, but it’s also just to see the different experiences that one tune or one genre can lead to.”

Doo-Kingué says she’s loving the experience of testing out her songs in different formats and she’s even more excited to be embarking on a six-week tour across Canada in support of her new project.

Writing the solo album was a way to reconnect with herself and her roots, she says, and now she’s ready to reunite with her trio, filling out the songs with a rhythm section.

Doo-Kingué’s tour will bring her to Jasper July 9 for her third appearance in town. The show is at the Olive Bistro and Lounge, beginning at 8:30 p.m.