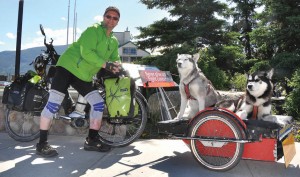 Since being diagnosed with malignant melanoma in 1987, Randolph Westphal has been biking around the world with his four-legged companions.
Sarah Makowsky photo

After battling cancer for 25 years and surviving a devastating accident in 1996, Randolph Westphal chooses to pedal forward.

The 55-year-old from Germany has been biking around the world since being diagnosed with malignant melanoma in November 1987. At that time, because the cancer had already spread to his lymph nodes, doctors gave him six to 12 months to live.

With 28 cancer operations behind him, four of which were deadly, Westphal overcame the odds.

“I think my cancer is from a lot of negative stress—no parents, no love, no family, and that’s why I got cancer,” he said. The ex-computer technician relinquished his day job and started cycling because he wants to send others a message to never give up.

“I like to show people what you can do when you have cancer.”

Westphal practices what he preaches. Not only is he in cancer remission, he is still recovering from a biking accident in Argentina in 1996, where he almost lost his leg. “I lost my memories and my speech,” he adds, noting that he still has trouble speaking sometimes.

Today, Westphal rides with his husky malamute Nanook and her son, Chinook. “This is the third generation [of dogs],” he said. Chinook is Shir Khan’s great-grandson. The dogs get exercise running alongside Westphal and they also ride on a carriage that he tows.

The huskies offer great companionship. “They are guard dogs, they are my friends, they are loyal, and they don’t lie. And they never say where I have to go,” he laughs.

To date, Westphal has biked more than 40,000 kms in North America. His favourite part of Canada is B.C. and the Rocky Mountains. Next, he hopes to head north to Whitehorse via Highway 40 because he hasn’t travelled that route yet.

“I have been to the Yukon and Alaska four times, mostly in the winter.” He remembers the coldest day as -51 C. In 2003 he set a world record for biking 153 days during the winter in Eastern Canada.

During the first 15 years of his adventure Westphal usually tented, but now he stays indoors and relies on kindness and donations from strangers. He does speaking engagements at schools and hospitals “whenever I have a chance and people ask.

Westphal occasionally returns home to his apartment in Germany. The last time he was home was 2.5 months ago. Though his hips and knees are sore from the repeated strain, Westphal doesn’t plan to stop anytime soon.

“I can’t quit because there is a sign on my bike that says ‘never give up’.” For more information on Westphal and his journey, visit www.randolph-westphal.de.