You Are Here: Home » Archive » Edith Cavell brought to life in Jasper play 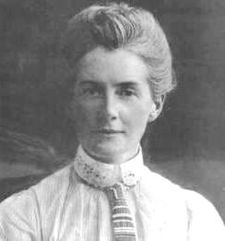 Every Jasperite knows the story of Edith Cavell.

The British nurse worked in Belgium during the First World War, where she famously committed to treating all of the wounded, regardless of what side they fought for.

Eventually she started helping allied soldiers escape in 1913, spiriting more than 200 of them to safety in neutral Holland, before she was caught by German officials and executed, despite huge international outcry.

Throughout the year that marks the 100th anniversary of her death, you will find Cavell all across Jasper—at the Jasper-Yellowhead Museum and Archives, or at the base of the mountain that bears her name—telling the story of her life, courtesy of actors Stephanie Marr and Lena Fraser.

The actors, working in collaboration with Jasper Habitat for the Arts, will be performing a one-woman show based on the life of the famed First World War nurse. They will pop up for several performances during ceremonies marking her execution, as well as on several other occasions throughout the summer.

“We’re pushing her in as many places as we can: events, dinners; wherever Ms. Cavell can appear in spirit,” said Marianne Garrah of Jasper Habitat for the Arts.

The performances are a revival of Edith Cavell Returns, a play written 20 years ago by Jeff Shea, with the help of Jasperite Grace Kohn.

The play features the spirit of Cavell, speaking to the audience from the afterlife. Through her present day reflections and flashback to seminal moments of her life, her decisions and motivations for her actions during the First World War are illuminated.

“It’s a very intense show because it’s World War One and the whole focus of the play is her meeting people head on, in the spirit,” Kohn said in an interview March 30.

For several years in the late 1990s and early 2000s Kohn spent countless nights portraying Cavell, and said that it was one of the most rewarding times in her acting career.

“The script was awesome, and there was so many layers in the script that I could still find stuff [five years in],” she said. “It was always, always a real pleasure to be honouring her legacy and her message.”

Fraser, one of the actors who will take on the job of honouring Cavell’s legacy, said she is excited to get to know Cavell.

Commenting on how interesting Cavell’s life was, she said she admired how the nurse had such strength in the face of the difficult times she lived in.

“The most compelling thing about the play is how much she goes through in her life, and still is able to just want peace and friendship and brotherhood, and just wished no evil on anyone,” she said.

She said that while the play hits with a heavy emotional punch, it is also highly educational, and provides a detailed account of one of the bravest and most interesting heroes during the First World War.

“I know sometimes history for everybody isn’t the most interesting—or sometimes people aren’t as knowledgeable about history. But I think this is a really good way to get people interested and make them understand one person’s life in that time of the world.

“I’m really excited for this summer to just dive into the character: it’s going to be an amazing and emotional and educational show.”

Kohn said she is also excited to see Cavell brought to life in Jasper once again.

Look for Cavell at events across Jasper over the next six months and specifically at a number of events on the weekend anniversary of her execution, Oct. 11-12.