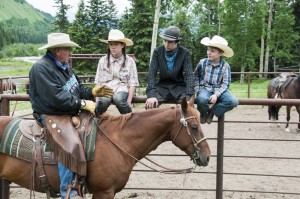 To drum up interest for the Jasper Short Film Festival later this month, Habitat for the Arts will be screening a documentary called Mountain Mustang at the Jasper-Yellowhead Museum and Archives Sept. 17.

The 44-minute documentary is part five of a six-part series on the Grande Cache, Jasper and Hinton regions, and features stories about the people who first lived in the region, from Aboriginals to fur traders.

“The series features stories about the traditions and the culture of our northern Rocky region,” said Susan Feddema-Leonard, producer of the six-part series called Canadian Rockies Series and the executive director of the Willmore Wilderness Foundation, which funded the project.

According to a short synopsis of the film, Mountain Mustang shares the story of master horseman

. The boys are descendants from the Canadian fur trade, whose forefathers arrived in the Rocky Mountain region in the early 1800s.

Throughout the documentary, Nelles shares his thoughts about working with the same family that his father worked with when he was a Jasper Park Warden in the early 1900s.

“The film focuses on the children and their connection to Jasper,” said Feddema-Leonard, who lives in Grande Cache.

“Horse culture is a big part of the Rocky Mountains and especially with the rodeo going back outside this year, I think we have that connection,” said Marianne Garrah of Habitat for the Arts.

Feddema-Leonard said she initially decided to produce the documentary series as a way of preserving the true history of the region.

“In 1907, with the eviction of the [Aboriginal] people from Jasper National Park, they basically erased the history of the region, so our job has been to piece that history back together,” said Feddema-Leonard.

Recreating that history has been a long, yet rewarding process that started more than seven years ago.

The series has been picked up by several networks in Canada and around the world, and has been nominated for four Alberta Film and Television Rosie Awards.

“It’s absolutely appropriate that it’s being screened in Jasper, because the story of the culture and traditions in this region basically started in Jasper and spread into the Grande Cache area,” said Feddema-Leonard.

The film begins at 7 p.m. and tickets are $10 for adults and $5 for seniors and youth. Tickets are available at the door.