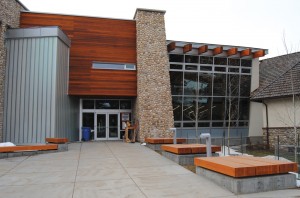 The Jasper Library and Cultural Centre will host a grande opening will take Sept. 30 to coincide with Alberta Culture Days Sept. 30 to Oct. 2.

The Jasper Library and Cultural Centre’s grand opening is about to get a lot more extravagant thanks to a $4,500 cash infusion from the provincial government for Alberta Culture Days, Sept. 30 to Oct. 2.

This will be Jasper’s eighth year hosting celebrations, however unlike other years, this year’s festivities coincide with the grand opening of the Jasper Library and Cultural Centre, Sept. 30.

The three-day affair takes place across the province every year to raise awareness about arts and culture in communities across Alberta.

“We’ve created a whole weekend of events and it’s going to be really fun,” said Marianne Garrah of It Only Takes A Dream (IOTAD). Garrah has played a major role organizing Jasper’s culture days events since its inception in 2008.

According to Garrah, the $4,500 will be divvied up between the building’s five occupants, which includes Habitat for the Arts (which is part of IOTAD), the Jasper Artists Guild (JAG), the library, l’Association Canadienne-Française de l’Alberta (ACFA) and the municipality.

During Alberta Culture Days, each organization will host various events throughout the building, which will include food, music, workshops, improv performances and a magician. The three-day event will also include the Mayor’s Night for Raven about the Arts, Sept. 30, and Bowls with Souls, a community soup-tasting experience, Oct. 2.

Garrah said she expects the events to attract about 700 people and cost around $8,000. The rest of the money for the weekend will be doled out by the cultural centre’s five organizations.

“We received more than half of what we need and that’s better than nothing, but we have to make it last for three days and spread it out,” Garrah said.

Out of the eight years that Jasper has participated in Alberta Culture Days, 2015 was the only year the town didn’t receive some type of provincial funding.

“We still made it work last year though,” Garrah said.

According to the province, arts and culture organizations across Alberta could apply for three separate grants, but could only accept one.

The $10,000 grant is only awarded to a few key sites—called feature sites—throughout Alberta. IOTAD had applied for this grant, but was turned down. The $4,500 grant—called a host grant—was awarded to numerous places across the province while the $1,000 grant is intended for communities that are only interested in holding one night of festivities.

“To be considered a host site you have to have things happening for all three days of culture days,” Garrah said. “Your community organizations also have to have their own money set aside for the events because the grant isn’t going to cover everything.”

Garrah said that within Jasper only one organization could put their name on the grant application, so without hesitation, she volunteered and offered to write the winning grant proposal.

However, Garrah reiterated that despite the grant being given to IOTAD the money will be split equally among the five organizations.

“The whole grant is to help cover some of the wishes of those five groups,” Garrah said. “With this grant the government usually allocates the money to only one organization in each community.

It’s not common for them to give a grant to one art club and then move on to a second in the same community.

“Since we’re all in the same building I thought it would be smarter to apply this way.”

Yvonne McNabb, the town’s culture and recreation director, said a schedule of events will be finalized near the end of August.