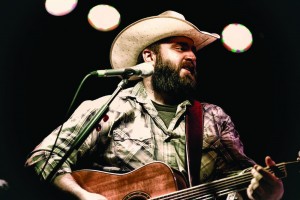 Quinton Blair will be at the Jasper Royal Canadian Legion, May 13 at 9 p.m. Cover is $10. Photo provided.

Whether he’s playing for a crowd of 1,000 or a small intimate show for a dozen, Quinton Blair’s country-folk songs always give off the ambiance of sitting under the stars around a roaring bonfire on a cool summer night.

“A lot of my shows are just me and my guitar,” Blair said. “And I usually end up swapping some stories and then playing songs about those stories.”

The Manitoba-based artist said his storytelling troubadour style started a few years back when he was working on a ranch in his home province.

“The staff would take visitors out on these moonlight rides, and then they’d come back and my wife and I would host these two hour bonfires,” he said. “And that’s where a lot of the storytelling and crowd engagement comes from.”

Blair is currently riding out the tail-end of his tour across the Prairies in support of his new EP Cash Crop. Paired with just his acoustic guitar and his voice, the musician will be bringing one of his cozy shows to the Jasper Royal Canadian Legion, May 13, before heading back home.

This will be Blair’ s first show in the tiny mountain community.

“Other musicians that I’ve worked with have told me I need to go to Jasper,” he said. “So, I kind of booked this whole tour around Jasper. I thought I’ll just fill in the other dates no problem, but let’ s make sure we get a good show in Jasper and have some fun out there.”

According to the musician, the soothing meets twangy tracks on his EP are mainly a collection of agricultural songs laced with hometown pride. Cash Crop touches on a slew of different topics from the struggles today’s young farmers face to the way oil money has changed the western landscape.

Blair added that most of the ideas behind his songs come to him at the end of the day as he swings on his front porch gazing across his farm’s fields.

“I love regionalization music.  I’m from Manitoba and this is what life is like for me here,”  he said. “I have a hard time writing songs about being an American or life in Tennessee because that’s just not me.”

When his songs aren’t commenting on what’ s going on at home, Blair likes to get creative with other real life experiences.

One of his new tracks, “300,000 kms” came to him after meeting a woman at one of his shows in Dawson, Manitoba.

“She pointed to this car outside and just said ‘Do you see that Mercury Topaz? It’ s got 400,000 kilometers,’” he said. “And at the time I just didn’t know what to say to that.

“A few days later I just started thinking about that and I just made up a story about the woman and turned it into a song about running from your past, but not wanting to let go of the vehicle that brought you there.”

Despite being named Manitoba Country Music Association’ s 2015 roots country artist of the year, Blair considers himself to be more of a folk singer.

After his spring tour, Blair is planning some summer gigs, but will be taking the fall off to not only focus on his music, but to spend more time with his four-year-old daughter. “I want to start playing less shows, but better shows,” he said. “I’m going to focus on challenging myself as a writer and guitar player.”