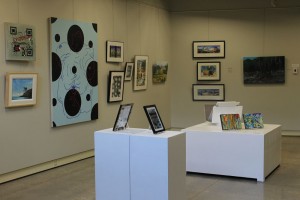 Municipal council has less than two weeks to decide whether or not to give two art groups in town a break on rent now that both groups have moved into the new Library and Cultural Centre.

The Jasper Artists Guild (JAG) and It Only Takes a Dream (IOTAD) originally asked council for a break on rent in August 2015 claiming years of construction delays on the new Library and Cultural Centre hurt both organizations ability to operate effectively.

In a letter on behalf of Habitat for the Arts, which is part of IOTAD, Marianne Garrah and David Baker originally asked for the first 12 months rent free, but that request was revised during a committee-of-the-whole meeting June 28.

The organization is now requesting the municipality waive the first six months of its rent followed by a six-month deferral period, repaid in installments beginning in July 2017, including interest.

Details about the organization’s payment plan are expected to be presented to council on July 19, before council makes a final decision.

If approved, IOTAD would save nearly $10,000 through the first six months.

JAG requested the municipality waive rent for one month, which would save the organization just over $1,600.

During a council meeting on July 5, Mayor Richard Ireland directed administration to seek legal advice on whether the municipality will be on the hook to cover the cost if IOTAD was unable to repay the municipality next year.

“It would be worthwhile I think to get some quick legal advice on whether we are at risk of absolving any of the other parties of any claim. If there is a loss and we approve this it’s entirely in our hands,” said Ireland.

Coun. Brian Nesbitt also asked administration whether there was anyway to recoup the money through negotiations with the builder and architect when they sort out which party was responsible for the building’s cost overruns and delays.

“Should we not be able to resolve the final terms of their contracts and payments … then the information we’ve collected to date would all be introduced in court as delay claims and things like this would potentially be part of that,” explained Mark Fercho, the town’s chief administrative officer.

Coun. Dwain Wacko suggested the final agreement with IOTAD should include a caveat that if the organization can begin paying rent in January, they should.

The municipality will vote on the proposal July 19. The meeting will be in the basement of the new Library and Cultural Centre at 1:30 p.m.