You Are Here: Home » Archive » Council considers a two-day busking trial for Jasper 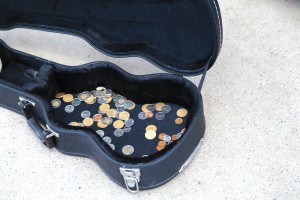 Council is considering a two-day pilot project that would see buskers on Jasper’s streets during Culture Days.

The goal of the project is to use the Sept. 25-27 weekend as a trial the municipality can review this winter when it considers the development of a busking bylaw.

Currently, busking is illegal in Jasper, as it falls under commercial use of public land, much like sidewalk seating and the farmer’s market, both of which are currently involved in their own pilot projects.

However, street performances aren’t new to Jasper’s Culture Days celebrations. Since 2009, numerous musicians and artists have performed on the street during the provincial event. This was allowed because they didn’t collect money; instead Jasper Habitat for the Arts gave each artist an honorarium, removing the issue of commercial use of public land.

Habitat would then just need an event permit from the bylaw department, listing each of the locations where the artists would be allowed to perform during the two-day event.

Although it’s worked in this past, this year’s Artists in the Streets event was complicated by the fact that Jasper didn’t receive any provincial funding for Culture Days, making it impossible for Habitat to provide honorariums.

Despite the setback, Habitat’s Marianne Garrah isn’t ready to scrap the whole event. Instead, she wrote council a letter last month, requesting a two-day busking trial that would see artists in at least five locations between the hours of 1 and 5 p.m.

“When we asked to place artists in the streets this year, we asked that they be allowed to put out a hat—to actually busk,” she wrote in her letter. “This is not something we had asked for before.

“Habitat is willing to assist in anyway we can to see Jasper have dedicated spaces for busking. Should this evolve we would be willing to create calendars and schedule artists as part of what Habitat brings to town.”

Over the last two council terms, busking has appeared on council’s desk numerous times, but to date it hasn’t been addressed at any great length, except to say it contravenes the municipality’s current bylaws.

Mark Fercho, chief administrative officer, agreed with Garrah during the Aug. 25 committee of the whole meeting and said, if council is to approve the pilot project, an assessment would be drafted shortly after the event, so the results of the project could be used to move forward with the development of a bylaw.

“This could be an opportunity to have something in the field to try it for a few days and then as we work through the winter and look at a longer term program, we have a really good pilot program to look back on to say, how did this work, what went wrong, what went right?

“It’s good to trial something to see how it works,” he said.

In the future, if the municipality chooses to, it has multiple options for moving forward with busking, whether it decides to license performers or set up specific “buskstops” throughout the downtown core, there are many models being used across the country, including in Banff.

Council will vote on whether or not to support the pilot project during its Sept. 15 meeting.