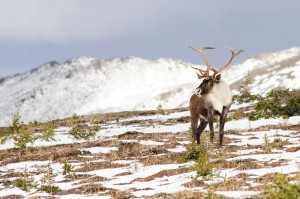 The last remnant herd of caribou in Banff was wiped out in an avalanche in the Molar Creek area north of Lake Louise in 2009, while caribou populations in Jasper National Park are precariously low.

In 2011, the federal government announced a caribou captive breeding/partnering arrangement between Parks Canada, the B.C. government and the Calgary Zoo, a cornerstone of Parks Canada’s caribou conservation strategy.

But Salman Rasheed, Jasper’s resource conservation manager, said they’ve been back to the drawing board since the arrangement with the zoo fell through in 2015, noting there’s no timeline set for reintroduction in Banff or augmentation in Jasper.

“It’s a complex issue and currently we’re involved in information gathering that is evidence- and science-based,” he said.

“Broad scale reintroduction issues take time and we want to get it right. We don’t want to release animals and still have declining populations,” he added.

“If we release animals, we want them to survive. There’s ethical issues about getting animals and releasing them without having a full understanding of what’s going on.”

Under pressure throughout their range, saving caribou populations is perhaps the most widespread wildlife conservation issue currently facing Canada. Across provincial, territorial, and federal jurisdictions in Canada, woodland caribou are listed as threatened or endangered.

Mark Hebblewhite, a scientist who has been heavily involved in caribou research and is a professor in the wildlife biology program in the department of ecosystem and conservation sciences at University of Montana, said caribou translocations from source populations of different ecotypes have faired poorly in the past, including the most recent Purcell translocation and the 1990’s Selkirk relocations.

He said the Committee on the Status of Endangered Wildlife in Canada (COSEWIC) has more recently identified the Banff-Jasper southern mountain caribou population as the central mountain caribou unit, noting they are rather different from caribou in B.C. and the boreal.

The federal government has not formally adopted the group’s report yet, but Hebblewhite said Parks Canada and the other agencies are still operating under the southern mountain woodland caribou recovery strategy that does not reflect this new scientific review.

“Finding a suitable source population of caribou from the Central Mountain distinct population unit as identified by COSEWIC will be all but impossible,” he said, noting central mountain caribou are essentially restricted to Banff, Jasper and north and east of the Continental Divide up to the Peace River.

“All populations—as in every single population of CMU caribou in this region—are declining, some of them very fast, like 10 per cent per year. Some have even become extirpated such as the Pine Pass herd in B.C, and of course Banff.”

Hebblewhite said there was talk of getting caribou from as far away as Nahanni, but new genetic studies coming out of the region show that caribou there are very different from these more southerly caribou populations.

“Based on the South Selkirk and Purcell translocations, we would expect disastrous survival of translocated caribou,” he said.

The only other viable option in Hebblewhite’s view would be capturing caribou from herds in the region in Jasper and putting them into captive breeding.

For example, he said the Brazeau and Maligne herds are functionally extinct or nearly so, and putting these wild caribou in a captive facility might be the only way to preserve their genetics.

“This would likely take decades to reach sufficient numbers to be able to reintroduce them given the low reproductive rate of caribou. This option was viewed as quite invasive and controversial, but in my view, it’s desperate enough to consider this option,” he said.

“There are many examples like the California condor where this option—capturing the last few remaining individuals in the wild—worked. We now have viable populations or nearly so of condor’s in California because of such drastic actions.”

According to Hebblewhite, the other best option is focusing on wild caribou conservation.

“In my humble opinion, it might be much wiser to invest the significant funding and resources that would have been required to conduct a translocation to doing everything possible to bolster caribou numbers in Jasper and give up on Banff,” he said.

“Translocations are increasingly seeming like a non-viable option because no one has any spare caribou to share,” he said.

Meanwhile, Parks Canada is working with the Revelstoke Caribou Rearing in the Wild Society (RCRW) to help recover mountain caribou in the regional ecosystem through maternity penning.

The goal and sole focus of RCRW is to fundraise, plan and conduct maternity penning of southern mountain caribou to increase caribou calf survival in the Columbia Mountains over a five-year period.

“We’re continuing to investigate the effectiveness and success of that,” Rasheed said, noting there’s a lot of uncertainty on how to raise caribou.

With caribou under threat, Rasheed said Parks Canada is finding it difficult to identify where to get source animals for reintroduction or augmentation. They’ve had talks with B.C. and Alberta provincial governments.

“The challenge is where do we get source animals from when pretty much every population is in decline?” said Rasheed. “Both provincial governments are reluctant to give animals from herds that are in decline.”

Even if successful in securing caribou from another herd, the federal agency has also been considering whether it would be a captive rearing program or wild-to-wild program.

In captive rearing, mature animals would breed and calves would be released into the wild, whereas a wild-to-wild program would see mature caribou from another population released directly into the wild.

“That’s been tried in B.C. in the south Selkirk mountain range and those animals did not fare well,” said Rasheed. “That reintroduction effort was not particularly successful and the majority were preyed upon and died for different reasons.”

Researchers are doing a bit more homework on release and survival. Some computer modeling shows up to 50 per cent mortality, including from predation or animals simply not knowing where their range is.

“We are completely uncertain and naive about what will happen whether we do wild-to-wild or captive breeding,” said Rasheed. “We don’t know what their fate is. We can model this using scientific modeling, but there’s still uncertainty.”

In 2012, the federal government announced it was committing $4.5 million over six years for the mountain national parks to move forward on its caribou conservation strategy in Banff, Jasper, Revelstoke and Glacier.

Early costs provided by Parks Canada of constructing a captive breeding facility were pegged at between $2 million and $3 million, with operating costs between $300,000 and $500,000 per year.

Those preliminary costs could vary significantly, depending on a number of factors, including the location of the facility, operational needs such as disease control measures, feed and husbandry requirements, and the cost to include a caribou conservation centre.

“Part of the investigation is looking into costing this thing out properly,” said Rasheed. “We’re still in the design phase of assessing what long-term requirements are.”

Jasper National Park has four main herds. The northern A la Peche herd, estimated at less than 100 animals, spends most of its time outside the national park. In recent years, surveys suggest the A la Peche population is declining.

Three additional herds of caribou are found in the southern part of Jasper, spending most, if not all, of their time within the national park. The three herds use distinct regions of the park and rarely interact.

In total, their numbers are estimated at approximately 55 animals and have been declining. The largest herd in south Jasper is the Tonquin herd with 38. The other two herds, Maligne and Brazeau, both have less than 10 animals.

According to Parks Canada, caribou historically occurred in two regions of Banff National Park. Caribou in the Nigel Pass area were part of the Brazeau herd that range primarily in Jasper National Park and the White Goat Wilderness area.

Caribou also lived in the Upper Pipestone and Siffleur valleys. This tiny, remnant caribou herd was killed in the Molar Creek area in an avalanche in 2009.