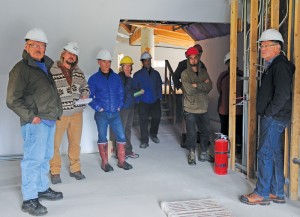 Council hopefuls donned hardhats and steel-toed boots to walk through the library and cultural centre, Oct. 4.

The tour of the construction site was organized to give candidates an opportunity to not only see what’s happening within the building, but to ask questions of Gord Hutton, the municipality’s on-site manager.

The majority of the tour resulted in questions about the features of the building—the flooring choices, the completion of the roof and the ceiling height, for example. But right as the tour was coming to a close and the candidates were standing around what will become the mayor’s office—located in the basement of the renovated heritage building—Jack Templeton, a candidate for councillor, asked the question that is on the tongue of many Jasperites: will the centre be completed on schedule for December?

Hutton noted that his job doesn’t include setting the schedule, but said he hasn’t heard anything to suggest it won’t, so he expects to see the building open as planned.

As a follow up, Brian Nesbitt, a councillor from 2004–07 who is running again, asked if it would be a phased opening or if all of the spaces—Jasper Artist Guild, Jasper Habitat for the Arts, Jasper Municipal Library, etc.—would be operational on opening day.

Hutton said the building will be substantially completed by the opening date, with small tweaks taking place here and there in the months following. He called that time a “flush-out period.”

Nesbitt then asked if on opening day all of the equipment and furniture for what will become the council chambers and the council work room would be set up and ready to go.

“Not necessarily,” responded Mayor Richard Ireland, who is standing for re-election.

The majority of the tour was spent in the area that will become the Habitat for the Arts.

There, David Baker, the group’s co-founder and a candidate for councillor, explained in detail what each space could and will be used for, including a pottery studio, a performance space and a sound recording studio.

He called it a “purpose-built art space” and explained that each room provides opportunities for learning and training, as well as artistic expression.

“It’s exciting for Jasper to have space designed for arts,” he said, noting that during the design process, he and Marianne Garrah requested that they be able to clean the space with a fire hose.

Judy Krefting, director of library services, also joined the tour, pointing out where the stacks will go, as well as office spaces, the circulation desk, the coffee area and computer stations.

During the tour, Karen Fontaine, candidate for mayor, inquired as to how much space each organization was gaining, particularly the library.

Krefting then produced a list of the square footage, which showed the library as having 7,041 square feet, which is about double the size of the former library.

Construction of the library and cultural centre began in November 2011. By July 2012, council had approved a budget increase of one million dollars, bringing the total up to $8.5-million.

The increases were the result of unforeseen issues, including the need for additional structural framing, the levelling of the old library floors, the stabilization of a crumbling chimney and the removal of asbestos. All of those issues were exacerbated by the fact that the old library is a heritage building subject to strict development rules.

Further budget increases are expected, as problems—which have resulted in an extended legal battle between the municipality, Stantec and Delnor Construction Ltd.—have continued to plague the building. Those problems include the inadequate materials and construction of the roof—the cost of which will fall on the contractor and architect.