You Are Here: Home » Archive » Battle with a grizzly ends in warden’s death

Battle with a grizzly ends in warden’s death

Park Warden Percy Hamilton Goodair died at this time 84 years ago. On his cairn, located in the Tonquin Valley, it says he “died on or about Sept. 12, 1929. Age 52.” Many years after his death, Jasperite Albert Baker, a writer and railroader who passed away in 1966, wrote this story of Goodair’s life and death. 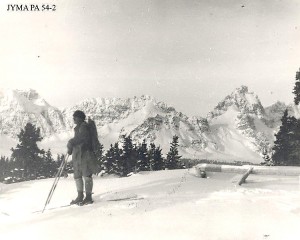 Photo courtesy of the Jasper-Yellowhead Museum and Archives

I would like to dedicate this true story to the memory of a courageous little Englishman who died, alone and unarmed, far from home, and whose life and passing were a tribute to the country of his birth.

During the many years since his death, I have felt an injustice being perpetrated against Englishmen everywhere, in keeping from them the story of one of their number who, in life, exemplified the highest ideals of a noble race, and who now lies on a hillside in a lonely mountain valley, under a cairn bearing the inscription “Percy Hamilton Goodair, 1877–1929.”

Much of Mr. Goodair’s early life is not known, but it is known he served in the Imperial army in Africa as a lieutenant, and was attached for a time to the British foreign office in Nigeria.

He operated a cattle ranch at Cochrane, Ont. when the first world war started. He enlisted in the army, and at the end of the war was discharged a lieut-colonel. Shortly thereafter, he joined the warden service in Jasper Park, Alta.

Jasper Park is situated in the heart of the Canadian Rockies, and comprises an area of 4,400 square miles of rugged mountain terrain. This vast area is policed by a sparsely scattered group of game wardens, each of whom is allocated a certain district. The force is administered from the office of the chair warden located in the village of Jasper.

Men react in different ways to the call of the wilderness. Some feel only the loneliness, while others become imbued with a growing feeling of serenity and contentment as the sounds of civilization are left behind. Percy Goodair was one of these.

He chose the Tonquin Valley, a very isolated area, as his own and remained there even when other areas were offered to him which were closer to town.

The warden’s main cabin in Tonquin Valley is situated on the shore of Amethyst Lake and is surrounded by some of the most breathtakingly beautiful scenery in the world. Reflected in the crystal waters of the lake are the towering peaks of Mount Geikie, Redoubt and the majestic Ramparts. In summer, the valley floor is covered with a carpet of wild flowers. This beautiful place has been justly called “The Garden of the Gods.”

The Amethyst Lake cabin is only accessible by saddle horse and lies a full day’s ride from its nearest neighbour. Before the advent of two-way radio, as in Goodair’s time, the only means of communications was by telephone. It was mandatory procedure for the wardens to phone the office of the chief every Tuesday morning at 11 o’clock. If they failed to do so, a party would be immediately dispatched to find out if they were in trouble.

On the route Goodair followed when checking his area there were several line cabins where the warden could spend the night. These cabins were kept stocked with emergency provisions.

One day as he rode around a bend in the trail approaching one of his cabins, he came face to face with a huge, battle-scarred old grizzly bear. The bear, startled, rose up on his hind legs, a rumbling growl emanating from his snarling jaws. Goodair’s horse rearered and snorted and before he could get the animal under control and draw his Lee-Enfield from his saddle scabbard, the bear had dropped to all fours and lumbered off into the forest.

When he arrived at the cabin, he found the bear had been there. The door had been torn from its hinges. The food cache had been smashed and its contents strewn over the floor. Plainly visible in the half-inch layer of flour which covered everything was the imprint of a twisted front foot.

A week later he came upon another of his cabins which had been ransacked and the same telltale footprints were clearly discernible around the doorstep. He became filled with a seething rage. As he viewed the ravaged interior of his once neat cabin, he made a silent pledge—“that bear has to die!”

Goodair was in Jasper early in September. He returned to the Tonquin on the 12th. While in town, he told the chief warden, Dick Langford, of the incidents with the grizzly. They were sitting in the chief’s office.

“Percy,” said Langford, “there’s a vacancy on the Whirlpool River area I would like you take. You’d be able to get to town more often. The change would be good for you.”

The little warden shook his head.

“Dick, I’m goin’ to stay in the Tonquin ‘til I get that bawsti’d or he gets me!”

On Tuesday Sept. 18, Goodair phoned in. All was well. On the following Tuesday, Sept. 25, Langford sat, anxiously waiting for the call that did not come. He arose and paced the floor. Perhaps some task had taken Goodair from his cabin. Perhaps the phone was out of order. He stopped periodically to stare at the ominously silent instrument.

Toward evening he called the town warden, Frank Wells.

“Frank, I haven’t heard from the Tonquin today. Pick up a couple of men and head for Amethyst Lake for the first thing in the morning.”

Wells knew of the trouble Goodair had been having with the grizzly. In the morning he left for the Tonquin accompanied by Charlie Matheson and “Happy” Reilly, both veteran mountain men.

When they arrived at the cabin about a foot of new snow had fallen. There were no footprints marking its unbroken surface.

They entered the cabin and the signs showed that Goodair had been interrupted in the preparation of a meal. His loaded rifle stood beside the door! Until they saw the rifle the search party had held out some hope Goodair might be found unharmed. Circumstances might cause him to leave his cabin, but nothing would cause him to stay away from that gun—except death!

The search party became aware of the frantic barking of Wells’ dog, the sound coming from behind the house. They investigated and out by the woodpile they found the dog had uncovered the mortal remains of the little warden.

In his hand he clutched a bloody-handled axe. Death had been swift and merciful. A terrible blow had completely smashed the left side of his chest.

Wells notified the chief of the tragedy, then the three wardens set out to avenge the death of their colleague. They came upon the outlaw’s tracks before nightfall. They followed them for two days. They shot two other grizzlies. They finally lost the trail on a rock slide and were forced to give up the search.

Among Goodair’s possessions they found a message. In it he requested if death were to overtake him while he was in the Tonquin, he wanted to be buried on the hillside beside his cabin.

Goodair had been a member of the masonic order and a party of Masons journeyed into the Tonquin. He was buried with full Masonic rites.

One member of the burial party said later, “As one stood beside that new grave and saw the sublime beauty of that lonely valley, covered as it was with a mantle of new snow, dazzling white in the noonday sun, surrounded by the mighty peaks which will stand sentinel over the grave of our friend and brother for all time, it was not hard to understand the request of the departed that he be buried in the Tonquin, the Garden of the Gods.”