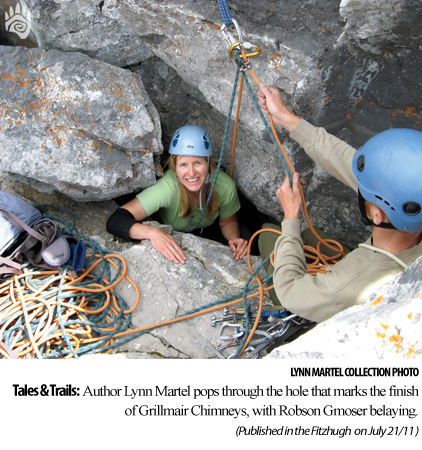 After spending many hours exploring the Canadian Rockies, writer Lynn Martel has just released her second book dedicated to the “world’s greatest playground.”

Martel grew up in Montreal and moved west in the 1980s. She is a popular Fitzhugh contributor and her writing has been published in many other newspapers and magazines. Her latest book, Tales & Trails: Adventures for Everyone in the Canadian Rockies, was released last month and features 20 stories of adventure, along with photos, maps, difficulty ratings, seasonal details and general information for those who love the outdoors.

“This book, my second book, (my first was Expedition to the Edge: Stories of Worldwide Adventure, RMB 2008), is all about the Rockies, and about how this fabulous part of Canada is the world’s greatest playground,” says Martel. “I mean that though, in the old fashioned, go outside, discover the miracles of everything that is not man-made kind of way.”

Martel says the 20 stories of adventure cover a wide range of different adventures people can experience in this region, from hiking on national park trails, staying in rustic backcountry huts, skiing across glaciers and even camping in -30 C, caving deep inside a mountain, rock climbing up a steep cliff, paddling the length of Maligne Lake and even cycling the Icefields Parkway from Jasper to Banff. “The stories are a mix of my adventures, stories of other peoples’ adventures and some history and the culture of this place, the Canadian Rockies,” she says. “Then with each story, which all happen in different little pockets of the Rockies, I’ve suggested a whole bunch of ways people can experience their own self-propelled outdoor adventures at their own level – family friendly, sweat a little, sweat a lot and bust a lung! And if you’re not sure how, hire a professional guide.”

Martel says that writing about the Rockies is really what inspired her to write the book in the first place. The stories for her latest book were written over a period of several years and all but two have been previously published. The end result was a collection of her favourite stories about exploring the Rockies backcountry and wilderness.

“After living in the Rockies for about 27 years, I look at these mountains and see a zillion stories of people, wildlife, spectacular untouched places that hardly anyone ever sees, and I wanted to share that world with my readers, and hopefully inspire them to get off the pavement and seek out their own adventures, whether for half an hour or a month,” she says. “I remember well, though, having grown up in the super urban world of Montreal, how when I first started living in Banff full-time in 1984, looking at the mountains and wondering not just what might be down that valley or over that pass, but how one could possibly go to those places. I’m hoping the book opens the window a bit for readers – locals and tourists alike. Mostly, I wanted to create a book that could help people look at the mountains and see more than just giant hunks of rock.”

The stories are all non-fiction, says Martel, and absolutely true.

“I am incapable of writing fiction, my mind just does not makes stuff up,” she admits. “They take place in 20 little different corners of the Rockies, kind of following the route our tourists drive, from Mount Yamnuska at the eastern gateway to the Rockies on the Trans Canada, out to Yoho and north on the Icefields Parkway to Jasper and Robson.”

These stories are not just about the mountains, she adds.

“There are so many people who have chosen to make the Rockies home who are involved in fantastic, interesting and worthwhile pursuits and projects, that I find there is an endless richness for me to write about, to share.”

Martel first visited the Rockies in 1982, but her first real exploring trip started on a mountain bike around 1985.

“Quite simply, I am in love with the natural landscape. I am fascinated by every tree, flower, grouse, pine marten, moose, every icefall, high alpine tarn and bubbling creek,” she muses. “I need to travel through the landscape, over that pass, down that valley, up that mountain, across that glacier. It’s just all so endlessly interesting and amazing.”

When discussing her favourite spot to hike, camp or have an adventure, Martel says she has dozens.

It was while on assignment for an area newspaper – to cover a presentation by wildlife photographer John Marriott who told stories to go with his photos – that Martel decided she would try her hand at another book.

“I realized I had quite a few stories already that together told a bigger story of this place, so the hamster started running,” she says. The decision to add in the trip suggestions came late last summer. “That turned out to be quite fun though, because as I put all those trip suggestions together, I realized just how many places I’ve explored in the Rockies over the past 27 years, and how much I’ve learned about this place. It was super fun to share that.”

Martel says that she has had a love for writing since she was 11 years old.

“For me writing is like breathing; I cannot not do it. It is how I process my experiences and over time it has become my place in my community, because I write so much about my home, the Rockies. I don’t only write about adventure, but also mountain history, culture, people profiles, and mountain related science such as glaciology and hydrology, and also about freshwater issues, which I find quite compelling.”

As for her future plans for writing, aside from her freelancing gigs, Martel says she is exploring the idea of writing a part two, Tales & Trails: More Adventures in the Canadian Rockies.

“I’m not a five-year plan kind of person, I like to be open to opportunities and ideas as they come to me – and I always have more than I can possibly accomplish in one lifetime,” she says. Her plans for more adventures are “north, north, north! Paddle the Nahanni past the Cirque of the Unclimbables, backpack and climb an easy route in Baffin Island, sea kayak in the Arctic, the list never ends.”

Martel’s new book, Tales & Trails: Adventures for Everyone in the Canadian Rockies can be found in Jasper at Sunwapta Falls Resort, Jasper Camera and Gift, Jasper Tramway, Maligne Canyon Tea House and Friends of Jasper.