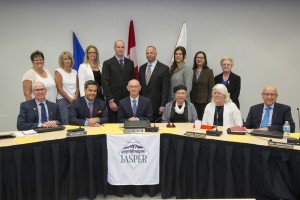 Two local arts groups won’t have to pay rent for at least the next six months, after council directed administration to defer collecting rent from the two groups until administration settles negotiations with Delnor and Stantec, the two parties blamed for the persistent delays in completing the Jasper Library and Cultural Centre.

The Jasper Artists Guild (JAG) and It Only Takes a Dream (IOTAD) originally asked council for a break on rent in August 2015 claiming years of construction delays on the Jasper Library and Culture Centre hurt both organizations’ ability to attract and retain members, offer programs and hurt their bottom line.

In June, after both groups signed their lease agreements to move into the new building, each group sent letters to administration with a revised request.

IOTAD asked the municipality to waive the first six months of its rent followed by a six-month deferral period, repaid in installments beginning in July 2017, including interest, however on July 11, it sent another letter revising its request for a third time.

According to that letter, ITOAD presented council with two options. The first request asked council to waive the first 12 months of rent or consider its previous request for six months rent-free followed by a six-month deferral period, repaid in installments beginning in January 2018, instead of July 2017.

If approved, it would have saved the non-profit organization nearly $10,000 through the first six months.

JAG requested the municipality waive rent for one month, which would have saved the organization just over $1,600.

During a council meeting on July 19, Mayor Richard Ireland was the first to voice his opposition to waiving rent for the groups describing it as a “gift” to the building’s contractor and architect who he blamed for the delays.

“I think council has demonstrated profound support for our cultural community, just through the creation of this building, but at this stage to provide for a lease fee exemption, although it appears to be on the surface support for the cultural community, it is in fact a gift for those we hold responsible for the delay in getting this building operational,” said Ireland.

“If we waive this now it is simply a gift to people I don’t think are deserving of that gift, so I’m opposed,” said Ireland, “It is not a reflection of my overall support of the cultural community.”

Mark Fercho, the town’s chief administration officer, told council the town’s intention is to try and negotiate a settlement rather then resolve the issue through litigation, which would be costly and time consuming, although he didn’t completely eliminate the possibility of legal recourse.

“My hope is that we don’t end up in [court], but we do need to be cautious until we’ve cleared that hurdle,” said Fercho, adding he hopes to reach a negotiated settlement with Delnor and Stantec by the end of the year.

Marianne Garrah, with Habitat for the Arts, which is part of IOTAD, said she was satisfied with the outcome.

“If they want to carry our banner forward to the contractors and work with them on what we’ve lost fantastic,” said Garrah, adding over the past three years the organization has lost almost $100,000 due to construction delays.